You are here: Home / Reviews / The Legend of Hell House–Reluctantly Faithful

For this writer, no horror scribe can touch Richard Matheson.  From his prolific screenwriting for The Twilight Zone (16 episodes, including the most popular, “Nightmare at 20,000 Feet”) to his short stories (“Steel,” “Button, Button” and “The Edge”–one of the most holy-crap-drop-the-book endings ever) and novels (“A Stir of Echoes” and the brilliant “I Am Legend,” which single-handedly launched the mass onslaught concept that permeates the modern zombie-apocalypse genre), Matheson is unequaled in his ability to scare the living daylights our of a reader with minimal narration and description.  He could do more in five pages than most authors can do in five hundred.

And though several of his books and shorts have been adapted to film, the crowning horror masterpiece of that collection is 1973’s “The Legend of Hell House (based on his ’71 novel, Hell House).”  Matheson provided the screenplay, and, like most of his other work, substance trumps flash.  The effects are pleasantly underplayed, but the funky camera angles, tension-heavy performance and shadowy atmosphere create a wonderfully spooky haunted house tale that could teach modern filmmakers a thing or three.

And it can teach the rest of us a little bit about faith.

They’re a group of the smartest folks in their respective fields.  But when physicist Lionel Barret (Clive Revill) and mediums Florence Tanner (the spiritual one; Pamela Franklin) and Ben Fischer (the physical one; Roddy McDowell) are challenged by an eccentric billionaire to spend a week in the most notorious house on earth to prove once and for all if ghosts are real, they jump right in.  And if they can, they’ll score a sweet financial payday.  But they should know, if someone dares you to do anything for money, it never works out well (Fisher especially, he was the lone survivor of an investigation in to the house twenty years prior). 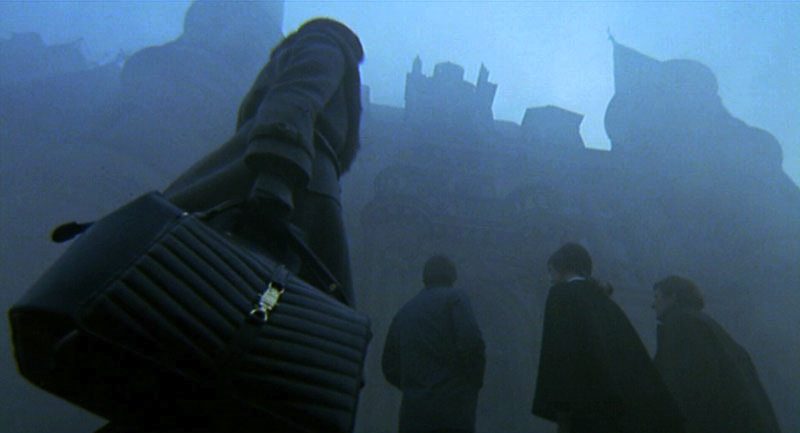 The home in question belonged to physical giant and sexual deviant Emerich Belasco (Michel Gough, long before he became Tim Burton’s Alfred Pennyworth) whose ideas of fun included murder, canabalism, vampirism, bestiality and a laundry list of even more appalling pastimes.  Belasco supposedly disappeared after a mass murder at his home, which is now believed to be haunted by the ghosts of his victims. 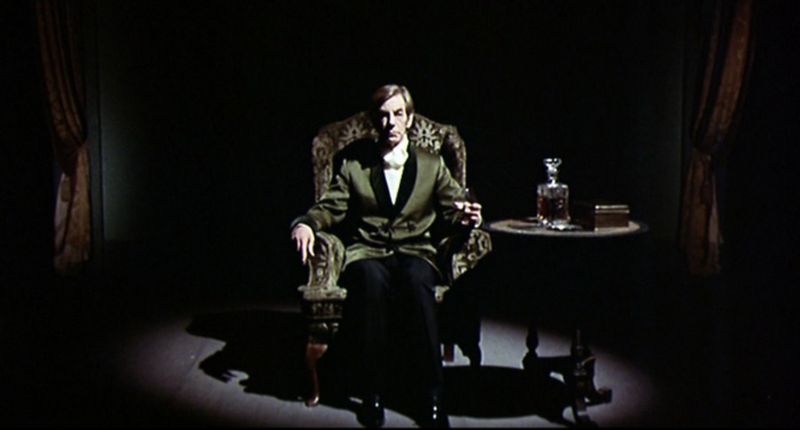 Although a skeptic of out and out paranormal activity, Barrett has been working on a machine he claims can dispel the negative energy left in the wake of the house’s wicked history. He brings it–and his wife, Ann (Gayle Hunnicutt)–along for the experiment.  Tanner is psyched (pardon the pun) to get started, but Fischer is content to ride out the week and collect his paycheck.
Once inside, Ann turns nymphomaniac and propositions Fischer, who rejects her advances.  Barrett catches the tail end of the incident and chastises Fischer before insulting his psychic abilities.  The attack spurs Fischer  into full-on paranormal warrior mode, but he’s quickly put in check by a spirit that lays down a poltergeist-like reminder of who’s in charge. 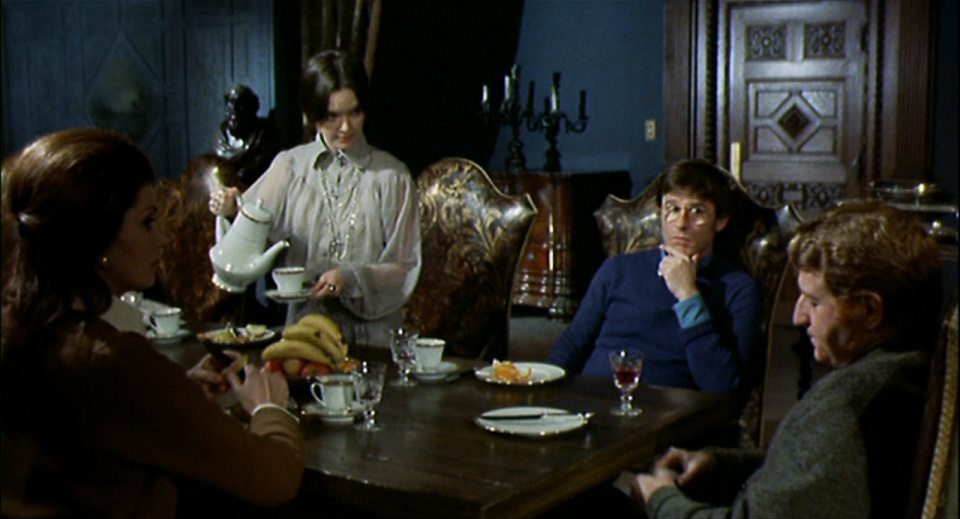 The group soon discovers the skeleton of Belasco’s son Daniel, buried behind a wall, theorizing that it is his spirit that haunts the house.  Tanner and Fischer bury the body outside the house, performing a Christian interment that they believe with exorcise Daniel’s ghost.  Soon after, a demonic cats shows up and attacks Florence.  A skeevy, invisible presence then starts doing some even skeevier things to Florence.  She gives herself over to it, believing it to be Daniel’s still restless spirit, in the hopes that she can appease him and end the haunting.  Instead, she becomes possessed in the process.
Barrett assembles his machine, but the newly-turned Tanner tries to sabotage it.  Barrett overcomes her and Tanner flees to the home’s chapel (yep, it has one) and dies a grizzly death–crushed beneath a crucifix–when she tries to warn the spirits about Barrett’s machine.  The machine seems to work, as Fischer declares the house to be cleared of the evil.  Apparently the evil didn’t get the message.  It fights back, slaying Barrett.  In the end, it’s left to Fischer to battle the entity–who he figures out is really just Belasco posing as a multitude of ghosts–with some good old-fashioned spiritual slings and arrows. 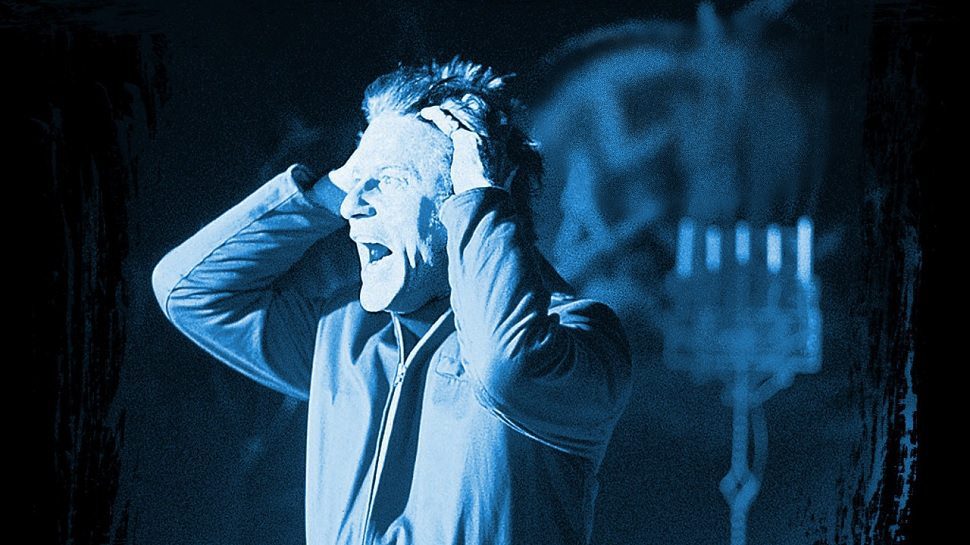 Matheson plays with several faith-based themes in Hell House: science versus religion, the fall of the righteous, the difficulty of believing.  But perhaps the strongest allegory is found in Fischer’s story and his reluctance to get involved in the mission.
The book of Acts (Chapter 9: 1-19) chronicles an interesting (though much less spooky) parallel.  After Saul is blinded on the road to Damascus, God speaks to him, telling him that a man named Ananias will restore his sight.  God then informs Ananias of His plan and Ananias immediately objects.  Ananias knew Saul’s history of persecuting Christians and worries that he will do the same to him.  But God reminds Ananias that He is in control and has big plans for Saul.  Ananias is to trust in Him and to step out in faith.  Ananias, concedes, finds Saul and lays his hands upon him.  Saul can immediately see, changes his name to “Paul” per God’s instruction…and the rest is history, as his preaching and teaching will go on to help convert the world.  If not for Ananias’ reluctant obedience, Paul’s ministry may not have ever spread as it did–heck it may not have even become a ministry.  And if not for Paul, how far would the message of Christ have spread?
God expects (and anticipates) no less from us.  He wants us to trust in Him and to follow his lead, even when we’d rather two-step with a different partner.  It’s not always easy to do what he asks of us, but we can be assured that if we are willing to step out in faith and follow through, great things will happen, we will be blessed and God will be glorified.
And that’s not just some story.
But it’s the stuff of legend.

A lifelong fan of horror and sci-fi, Jason now writes stories that he hopes will one day make it to the silver screen. He and his wife (and his three sons, two dogs and two cats) live in Powhatan, Virginia.