You are here: Home / Film / Meet The Rocket Man: 1on1 with Sean Gunn (AVENGERS: INFINITY WAR) 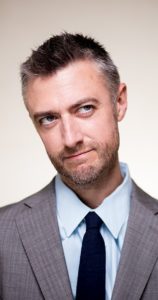 While he is perhaps best known from his time playing the affable Kirk Gleason in Gilmore Girls, Gunn has stepped into the forefront recently for his role as Kraglin in the Guardians of the Galaxyfilms. However, he has also found himself in the unique position of serving as physical stand-in for CGI fan-favourite Rocket the Raccoon as well. As Gunn prepares for the return of Rocket in Avengers: Infinity War, he credits his brother, Guardiansdirector James Gunn, for bringing him into the Marvel Cinematic Universe.

“Really, it was when my brother got involved,” he starts. “I know that my brother, James, was at a point in his career where he was a little down on directing movies because it was such a hard job to get it on one of these big tent-pole movies. Then, when he ended up being up for Guardians, getting that job, I was totally ecstatic for him.”

“I play both Kraglin on-screen and I also play Rocket [the Raccoon] on-set. That kind of came about during the first movie. [James] and I had worked together so much on various things in our career and he knew that he wanted an actor that he knew, trusted and had worked with to be able to play Rocket on set so that he’d have a real actor there to do it and not just a tennis ball on a stick or a PA holding up script in their hands or something like that. So, he asked me to do it and we ended up kind of figuring out on the go what the method was for that to work. Then, it turned out that it was basically me just getting down on my hands and knees and playing Rocket just as though he was there and it was really helpful to the other actors and the visual effects team. They weren’t able to use me for reference them when they started to animate the character and then I think it was a matter of ‘if it ain’t broke, don’t fix it’. So, then you know, it worked so well for the first movie that I ended up doing it again for Guardians Vol. 2and then for both Infinity Warmovies as well.”

Though most people associate Rocket the Raccoon with Bradley Cooper who supplies his voice, it’s Gunn’s work that lays the

groundwork for the performance. By providing much of the physical acting for the character, Gunn appreciates the hard work of the animators who can take his movements and bring Rocket to life.

“I play Rocket the entire time on-set…,” he recalls. “Then, the visual effects team then goes in and they start to put together a draft based on what I did–our movements, hand movements, and particularly my face, some facial expressions, things like where Rocket’s looking… For just little things like that, the animators will use what I’m doing as a reference. Then, later Bradley Cooper comes in and he does the voice of the character and they can change things then. He’ll flesh the character out and sort of put his thing on it and then if they want to make some changes based on either what he’s doing or some combination thereof, they can make those changes at that point as needed.”

Of course, playing two different characters within the same film brings its own set of challenges as well. During scenes where Rocket and Kraglin shared screen time, Gunn claims that he had work twice as hard in order to be prepared. 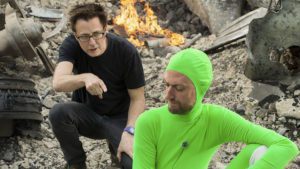 “There are four different scenes where [Rocket and Kraglin] are not only together [in Vol. 2], but they both have dialog. We really would just kind of shoot around each character and plug me in as much as we could. I always think that the preparation and focus are the most important components to go to acting on set and I had to sort of double my preparation and double my focus on those days. It wasn’t easy because I can’t really squat down as Rocket in Kraglin’s wardrobe. So, I was also having to do these costume changes where I would get and jumpsuit, which is a little stiff and hard to maneuver, and into my Rocket sweats, which is basically a track suit that I’m wearing. So yeah, we’d just have to go back and forth. We’d really have to just take a little longer to shoot and I would be doing the scene twice from the point of view of each character.”

Of course, the Guardians franchise signaled a shift in tone for the Marvel Cinematic Universe upon its release. While offering more humour and brighter colour schemes than other franchises (and not to mention the best soundtracks in the MCU), the most interesting thing about the Guardiansfranchise has been its ability to help audiences fall in love with the anti-hero. When asked about whether he feels this franchise looks for the good in the ‘bad guys’, Gunn argues that the backstories of characters like Rocket gives them the chance to explore what it means to be a hero.

“Well, I certainly don’t view them as bad guys,” he explains, “but they’re not motivated by altruistic qualities the way that the Avengers are certainly… But, I agree with your premise that over the course of the movies, I think the arc of those characters are still learning to identify the goodness that’s already inside of them. I think they’d had lives that have encouraged them to squash the goodness, like Quill living with the Ravagers or Rocket having been where he’s been, sort of lonely most of his whole life. They’ve been encouraged to not think about the good inside of them so I think part of the movies is them finding that.”

Having worked with an ensemble cast on Guardians, his experience on Avengers: Infinity Warmoves to another level entirely.

Billed as the ‘largest cross-over event in history’, the film features most (if not all) of the major characters that Marvel has introduced to audiences over the last decade. Nevertheless, Gunn believes that the film honours each character and hopes that the fans agree.

“There are a lot of characters and I think that that’s handled particularly well over the course of the two movies–which, if I can’t talk about the first one, imagine how little I can say it about the second one,” he muses. “We filmed them back to back. There’s still some additional photography to do for the second movie as is always the case and but I think the way that that issue of all these different characters participating in one story is really interesting and I think it works really well. We’ll have to wait and see what people think about. It certainly is a lot of balls in the air to juggle.” 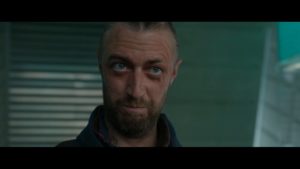 Providing the motivation for the Avengers to assemble this time is the impending threat of alien overlord, Thanos. Hell-bent on destroying the universe, Thanos’ quest for the Infinity Stones is rumoured to give the film a darker tone than other entries into the MCU. Despite its intensity, Gunn also feels that Infinity Waralso balances it with Marvel’s trademark humour.

“I haven’t seen the movie yet so I’ve got to start with that,” he begins, “but I do think that it has a heaviness to it that I think is super cool. I think it’s warranted, personally. I mean you can’t have all these disparate franchises that you’re tying together under one massive banner and be sort of glib about it. I think that these movies are going to be serious. There’s certainly plenty of comedy though. I mean, you know, we have the Guardians in there. We’ve got the crew from Ragnarok in there. I think there’s a lot of laughs, but I think the overall tone of piece is not super light. I think fans will like that because it’s pretty serious. Thanos is serious business.”

Furthermore, one of the highlights for Gunn of working on Infinity War was the opportunity to combine the Guardians crew with a more diverse cast, allowing new interactions and conflicts.

Says Gunn, “I think every actor in one way or another helps define who the character you’re playing is, particularly from Rocket’s 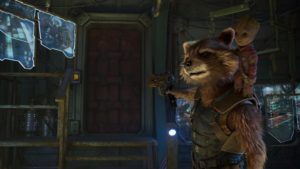 point of view. Rocket has been in space his whole life. He knows very little about Earth or the people who live there other than what he knows through his friendship with [Peter] Quill. So, his whole relationship to the earth is based on what Quill has told him and when he comes across any of these people from the Avengers universe, he has a very different perspective of them than any of us would have of them from down here. If anything, I think they’re not quite so impressive to Rocket.”

With his success in the Marvel Universe and Gilmore Girls, one might wonder what Gunn hopes to do next. Still, rather than get preoccupied with what is to come, he prefers to simply focus on looking for great stories to help bring to life.

“I try not to prognosticate or wish too much about where my career is going to go because then you’re only setting yourself up for disappointment. I’ve been very, very lucky to work with incredibly talented people with my brother in Guardians, with the Russos and everyone else they’re working with on Avengers and the list goes on and on, but also with Amy Sherman-Palladino and her husband, Dan, on Gilmore Girls. They’re such great writers and I’ve been so lucky and I really just try to chase the words. I think story is king still. Good stories and good content still rule the day and I just want to keep doing stuff like that. I’d love to revisit Kirk on Gilmore girls if we ever make more, which I don’t think would happen anytime soon. I’d take a look at the character again at some point down the line. I’d love it.”

To hear full audio of our conversation with Sean, click here.