You are here: Home / Current Events / The Difference Woodlawn Can Make 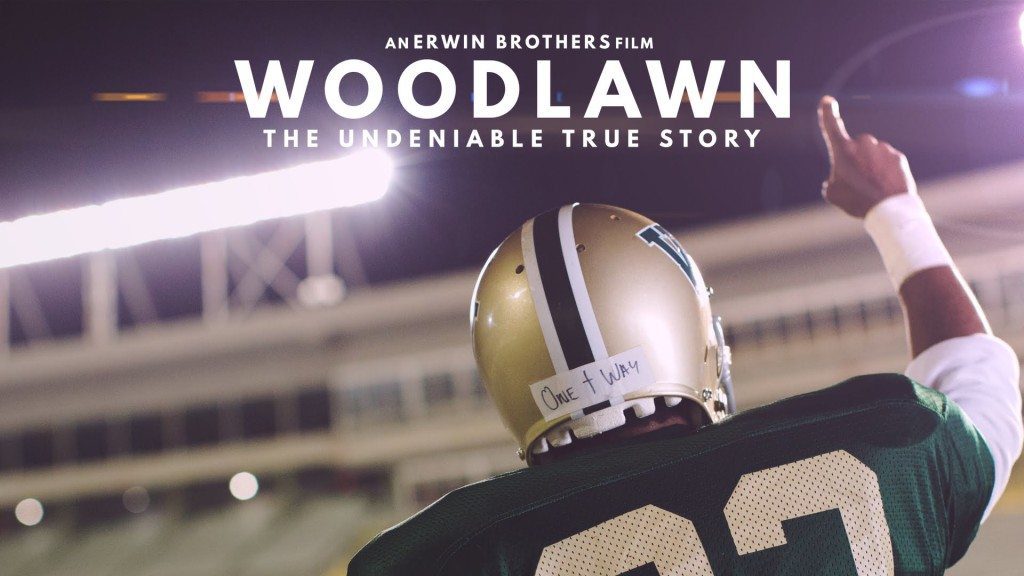 The first time I saw Woodlawn, I knew I was watching something different. While some might tell you that this film will revolutionize faith or instantly convert everyone to Christianity, I will tell you that its power is something more realistic but no less spectacular. This story about faith, race, and football in Birmingham at the onset of desegregation has the power to change how you see your life.

The film tells the story of the forcibly integrated football team at Woodlawn High School where Tandy Gerelds (Nic Bishop) is coach. The team is broken, struggling, and just as inclined to riot as the community around it. When the director’s father, Hank Erwin (played by Sean Astin) returns from a Billy Graham Crusade fired up about his faith and asks for permission to share it with Gerelds’ football team [including future Crimson Tide and Miami Dolphin running back Tony Nathan (Caleb Castille)], he leads more than forty players to convert.

Erwin’s message goes something like this: “Does this kind of thing [racial violence and rioting] happen so much that it just feels normal? It doesn’t have to be this way! Jesus said, I am the way and the truth and the life. This means something to me because I let it mean something to me… It means I love you.”

Wow. There’s no discussion of sin, judgment, or condemnation, just a reminder that they are loved by the God of the universe who wants what is best for them. Eventually, the revival that sweeps the team spreads to their fans, to their community, and even their competitors. This is a true story and it’s better than fiction.

Still, I promised you something transformational, and I don’t mean just the story of the Jesus Movement in the 1970s!

After seeing the film, I found myself reflecting on another interaction that lead into Erwin’s message. Erwin asks Gerelds to speak to the team, and Gerelds incredulously asks, “You know it’s a public school, right? That kind of thing doesn’t happen here!” But, of course, he relents.

I’m a pastor, a husband, a father, a son, a friend, and a writer but I’m also an English professor. When it was time for my students this semester to write their “All About Me” papers, they encouraged me to write my own. My students wanted to know me – and I struggled with how to explain who I was. Could I do that in a way that shared my faith because of how much it is part of my life? Was that something I could do without pushing my faith on someone else, while also being true to myself?

I laid out who I was, and continued teaching. There weren’t shouts of “Amen” (nor should there have been) but no one seemed offended. I taught, I handed out assignments. Business as usual, right?

Until the first young man walked up, and said, “You’re a pastor! I knew I could talk to you.” That’s when he shared how his father had been murdered before his high school graduation, and how he was still struggling with his loss.

Until the class period where we talked about the ‘worst thing that ever happened to you’ and my students shared about their faith. That’s when one young African American woman stood up, walked across the room, and held the young white woman who tearfully shared her story of longing and loss.

Until the class period when another young man walked up and clarified that I was a pastor, before sharing about how his mother had just been sentenced to prison time. Then he asked me to pray for her, and for him, right in the middle of my classroom.

Suddenly, Woodlawn seems like the kind of thing that could happen here. Revival seems like something we should be looking for. Love is the reason we’re here.

There is one way. It’s love through Jesus Christ.

Woodlawn can be found in theaters nationwide this Friday, October 16. It is rated PG for thematic elements including racial tension and violence.