You are here: Home / DVD / Comix: Beyond The Comic Book Pages 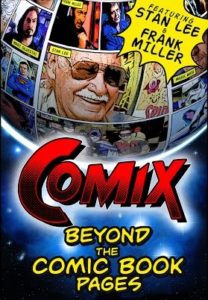 As a comic book fan, it has been an amazing ride the last two decades. Comic books have gone from being considered just for kids, to a misconception of what fans are like, to box office hits and pop culture phenomenons. From movies to TV shows, there is new life in the genre like never before. You no longer need to ashamed that you are a comic geek; in fact, you are part of the cool kids now!

With Comic-Con International (the mother of all Comic-Cons), it only seems fitting that this documentary comes out this week. If you a fan of comic books, this is a great pick up that features some of the most iconic creators in comics, as well as behind-the-scenes stories and ideas. If you are an aspiring creator, this film also gives great tips from those looking to break into the industry itself. It is clear that most of the film was recorded several years ago, as well as the one-on-one interviews with Stan Lee and Frank Miller, but it still holds relevant today where the genre continues to expand.

This is a two-disc film, where the first disc is the actual documentary that features many of the top comic book names in the industry like Stan Lee, Frank Miller, Neal Adams, Todd McFarlane, John Romita Jr., and more. You also hear from fans about their take on the genre and where it is now. The film does a great job in giving us the history of comics: how they have evolved, fandom, and even touches on cosplay and it’s impact on places like Comic-Con. I’ve seen my share of documentaries on the genre, but this is by far one of the best in terms of all around information and really giving fans and aspiring creators true insights on all things comics.

The second disc features one-on-one interviews with Frank Miller and Stan Lee. I have to say, as a fan, this is “must see.” Frank and Stan really dive into their past, how they made it, the struggles they had, and even where they are heading today. My only gripe, is that the camera man was not good in the focusing in and out on the interviews. Outside of that, these interviews are great and definitely a must-have for any fan of comics.