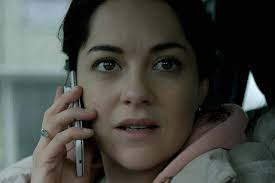 It’s cloudy, it’s windy and after an oppressively hot summer, this September morning is cool and refreshing for the first time in months. I walk quickly down the street, push through the revolving door and emerge suddenly into the lobby of the InterContinental Hotel. It’s fancy, busy and about 30% of the well-dressed faces feel to me like they should be familiar. Slick, shiny suits and well groomed beards, fashion and beauty choices much more bold than they usually would be at 11am in the morning, lanyards around necks and camera gear piled into bags dart here and there across the foyer. It’s TIFF time in Toronto and I’ve just landed myself in the middle of the action.

I am here to interview Sarah Greene, the star of the film Rosie, and after taking a brief moment to collect my thoughts I make my way across the fancy hotel bar, through a forest of orchids, to a table with a familiar face that I recognize. Greene seems calm, collected and perfectly at ease. She is dressed for an upcoming photo shoot in a black floral wrap dress; voluminous dark hair frames her pointed, intelligent face. 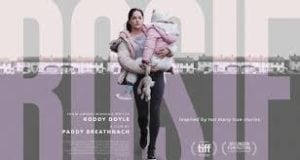 “So! Two films at TIFF this year [Black 47 and Rosie, both Irish] that’s exciting!” I launch right in, mentioning also that I’ve seen quite a bit of great Irish film and theatre lately. “Ya it’s brilliant… We’re a nation of storytellers, we’ve had our Becketts and Joyces, so it’s not surprising really.” I can see that she’s proud of to be a part of the creative work happening in her home country.

Greene grew up in the town of Cork on the South Western shores of Ireland and was trained in Dublin at Gaiety School of Acting. She is Irish through and through and the pleasant lilt in her voice confirms it. Though extremely different stories and settings, both Black 47 and Rosie tell stories of Irish families suffering due to governmental mismanagement. The process for Greene was entirely different from one film to the other. “For Black 47, I starved myself and had to learn Irish, you know, I didn’t speak Irish. For Rosie, I put on weight, which was much more enjoyable.” No doubt!

Rosie tells the story of a hardworking Irish couple struggling to find a place for their family to live amidst Ireland’s housing crisis. The father works all hours at a catering business and Rosie is left to call hotels and temporary shelters trying to find a place for the family to spend a week, a couple days, even just the night, all while also caring for their four children. Filmed in long takes with a handheld camera (and crew) squished into the car alongside Greene and the four kids, the process all happened right up in Greene’s face. This up-close and personal style had a surprising affect on her. “It was the first time I ever really became not self-conscious. I didn’t care what I looked like, I wasn’t aware of the camera, the story was too important.” 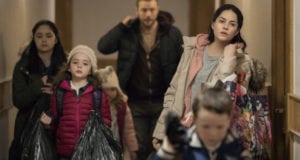 As she begins to talk about the reality of the situation in Ireland, the story falls out of the world of fiction and onto the table in front of us. The juxtaposition between the urgency of the housing crisis and our setting is stark. A waiter delivers green tea for her and sparkling lemon water for me as I glance around at the fancy restaurant and it’s elite guests. “In July alone four families a day were made homeless in Dublin. There are over 3.5 thousand kids homeless in Ireland at the moment… Especially in Dublin there’s very few places available to rent and the ones that are the rent is just astronomical… big huge businesses – Google and Facebook – have bought up a lot of apartments and they lie empty!”

Both of us are leaning forward, the tea sitting forgotten on the table between us. Feeling shocked out of our upper class environment by this sudden deluge of heartbreaking facts I sit back and quip that I wish we could just fix it. “Ya. Right. The Pope came to visit and we put millions into that! Put that [money] into the homeless situation, the housing crisis I should say, not the homeless situation. Buy houses with that! House all these 9000 families. House them! So. Infuriating.” Those last two words are punctuated by mini pregnant pauses.

What struck Greene personally was the fact that often “we take having a home for granted… It’s a basic human right to decide what time you want to go to sleep at… It’s horrendous to have that taken away from you and it just opened my eyes I suppose.”

I turn the conversation away from these pressing issues and on to the lighter matter of what drew Greene to acting. Immediately she sits back from the table, relaxing against the cushions that frame the booth against the window of the restaurant. Her whole face lights up as she tells me how she fell in love with the stage as a child and “never changed [her] mind”. She talks about how she loves getting lost in a character, loves having conversations and feeling emotions that we don’t get to have everyday, loves experiencing life at a more heightened level. “It makes me feel very alive… I think it makes me more empathetic. More compassionate.”

The cloudy light from outside is filtering across our table. Both Greene and I have relaxed into the conversation. The hovering publicist, the makeup artist, the noise of the restaurant have all receded into the background and we are alone here, now, sharing in a moment of being thankful for what you have. “You have to love these characters, love these people to do them justice I suppose… If you can touch someone with a story, make people feel something then yeah, that’s a gift. It’s a pretty great way to spend your day.”

This is a pretty typical actor answer but, coming from Greene, it feels genuine. She falls into a reverie about how much she loves people watching. She shares a little anecdote about watching people when she’s stuck in traffic and wondering who they’re going home to. And it’s not just some thoughtless comment from someone pretending to like watching people, imagining what it might be like to pay close attention. No, this is an actual memory of a moment in time when she was in a car, looking at the people around her. I wish we could continue along this train of thought. I feel like I’ve finally pushed past the business of promoting this film and caught a glimpse into the person in front of me.

But, it’s a pretty great note to end the conversation on. I check the time and she jumps back to the present moment, “Yes, I have a photo shoot to get to.” We thank each other and she rushes off to complete her short, 24-hour stay in Toronto with photo shoots, more interviews, and various press events. I grab a corner of the hotel lobby to jot down a few impressions and let the setting and conversation settle in my mind before pushing back through that revolving door and out into the blustery September day. 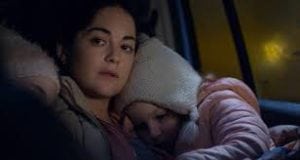 Thinking back over everything Greene shared with me around the immediacy of the problem in Ireland, and other places too, I am struck by the timeliness of this film. Often movies tell stories of times gone by with all the light of hindsight shining in. This story, told from the inside of a car, almost from the inside of one mother’s frantic mind, is happening now. Currently. As we speak. So, why tell this story now? It’s obvious really. Writer Roddy Doyle, director Paddy Breathnach and the whole team are attempting to bring this issue out of the newspapers and into our homes and our hearts. It’s a specific story told to a specific audience in hopes that each of us will sit up and listen.

“I hope it opens a conversation at home… It’s Roddy Doyle! He’s the voice of our nation really so hopefully change might come. That’s all you can hope for in making a film like this. Open a conversation.”