You are here: Home / Interviews / The Saint of Killers Speaks: 1on1 with Graham McTavish (PREACHER) 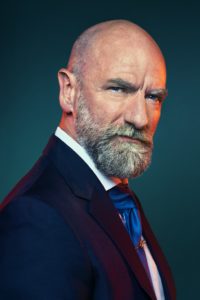 AMC’s Preacher has returned… but the Saint of Killers is right behind him.

As the second season of the supernatural dramedy is unleashed, actor Graham McTavish is excited about the opportunity to for the audience to reconnect with some of the the most unique characters on television.

“[Preacher] is based on a series of comic books that were written in the late 90s into the early 2000s,” he begins.  “It concerns a Texas preacher named Jesse Custer (played by Dominic Cooper), who becomes host to an entity called Genesis, which is a product of a union between an angel and a demon.  His girlfriend is a female assassin, his best friend is an Irish vampire and he’s pursued across America by a sort of beast from Hell, a relentless killing machine, [named] the Saint of Killers (who I play).  It’s quite the ride… There’s no other show quite like it.” 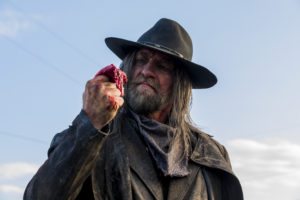 Though Preacher has become known for its dark, brooding tone and graphic violence, McTavish also insists that the show also carries a dark sense of humour and energy to it as well.

“It’s also really funny.  There are things we can do on Preacher that you can’t seem to do anywhere else.  There’s a sort of style and flare and it’s very true to the comics both in its content and in the way [that] it’s shot.  As a fan of the books, it’s been a fantastic privilege to be working on it.”

Interestingly enough, one of the key participants responsible for bringing Preacher to the screen is executive producer, Seth Rogan.  Known primarily for his comedic roles in films like The Pineapple Express and Neighbors, Rogan’s involvement might be considered somewhat of a surprise.  However, McTavish assures the fans that Rogan’s vision for Preacher comes out his deep love of the source material.

“[Seth] is a huge fan of the books, like me.  This is a passion project for [him and co-producers Sam Catlin and Evan Goldberg],” he explains.  “They’ve been wanting to make this for years and years and years.  When you bring that kind of fanboy passion to a show like this, it’s actually important that it’s in the hands of people like that.  They guard the integrity of [comic creators] Garth [Ennis] and Steve [Dillon’s] work while bringing their own special style.  It is a different medium so it has to be told a different way but they’re very, very faithful to the content and the spirit of the books.  Like the comics, you never quite know what’s coming next with those two… It’s great!” 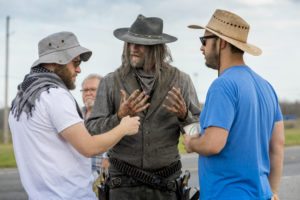 In Preacher, McTavish plays the vicious Saint of Killers, a cowboy assassin unleashed upon Jesse (literally) from the pits of Hell.  Though one might assume that a character like this is consumed by a deeply rooted sense of vengeance, McTavish argues that the character is far more complex, motivated by his own sense of justice and even love.

According to McTavish, “He was a cowboy who, like all the main characters, who is struggling with that inner conflict between good and evil.  He’s trying to be a good man.  That is taken away from him and he almost becomes an Old Testament, Biblical vengeful character and he’s recruited by Heaven and Hell to get Genesis and Jesse happens to be the host of that entity.  So, he doesn’t have anything personal against him at this time.  He’s a means to an end.  He’s in the way.  Just like anyone that strays into the Saints path…  If the Saint gets Genesis back from Jesse, the deal is that he gets to rejoin his family in Heaven.  So, in that sense, his journey is, in a very tortured and violent way, motivated by love.  I think anyone with a family can imagine themselves going through any kind of hell to protect them.  That’s how I see him.”

“I think certainly in Season One, he is inspired with justice.  I mean, it’s very extreme.  It’s got that sort of Old Testament feel to it: ‘You do this to my family.  I’ll do this to the whole town.’ I mean, that’s pretty dark stuff.  There’s no half measures in that sense.  He has a sense of justice.  He does.  And, when he goes back to the town, he does so with the best of intentions… I guess there’s a mixture of both [justice and vengeance].” 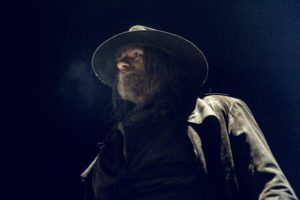 A long-time fan of the Saint himself, McTavish says that the opportunity to play him was simply too exciting to pass up.  As a result, he has little trouble getting into character, despite the Saint’s vicious demeanour.

“It’s enormous fun to do it.  There are different ways to get into a character like this.  In this case, when I put on the dusty coat, the hat, strap 10 lbs of iron to my waist and ride a horse into a western town, that does a lot of the work for you, believe me… There’s this anger, this rage.  We all have different approaches.  When I have to turn on that feeling, I think of my family and my young children.  If anything even remotely happened to them like what happened to the Saint’s family, I mean that would be a motivation for some pretty extreme behaviour.  I think that’s how I relate to him.  He appeals to a lot of fans to the book.  I think he kind of represents the purity of that justice.  We’re not going to hear that point of view. You’re simply going to be punished.”

Deeply rooted within Christian mythology, the show’s tone is unlike anything we’ve seen before on television.  Both reverent and irreverent at times, Preacher seems bent on exploring the concept of religion in unconventional ways.  Although it’s set against a spiritual background, McTavish believes that, ultimately, the show is focused on exploring the nature of humanity and our battle between good and evil. 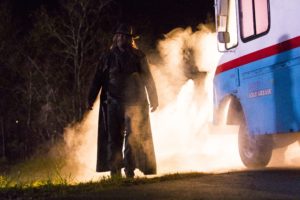 “For me, what is really being explored in the story… is those characters who are struggling with this eternal conflict between good and bad, or good and evil if you want to call it that,” he states.  “People try and do good things, and they screw it up.  Now, in some examples with these characters, they do that in the most extreme ways but, essentially, it tells a human story set against a supernatural–maybe spiritual–background.  But the story is universal and that’s what I think appeals to me about it is that there are no neat answers in Preacher.  It’s not something you read for comfort.  It’s not like the typical procedural dramas… it’s much murkier.”

Interestingly, Preacher is merely one of many shows on television right now that seek to explore man’s relationship with the spiritual.  With titles like Supernatural, and American Gods ranging in style and tone, the common thread between them seems to be their interest in spiritual conflict.  In light of this, McTavish agrees that these shows tend to reveal a deeper longing for answers that lies rooted in the heart of our culture.

“I think particularly post second World War, maybe a little more recent than that, there’s something in the collective identity among people, not just in America,” he reflects.  “The rise of individualism against community.  All of those things.  I think they all play towards giving an appeal to shows that explore an alternative to that solution that try to resolve that in kind of a communal way, some in a more spiritual way, of finding answers. But, at the same time, not delivering those answers in kind of a sort-of easily spoon-fed way. It reflects the complexity of our time post-war.  I think, to some degree, thinking of my own parents, life was a lot simpler… In the case of the Second World War, you were faced with a very obvious enemy.  ‘This is fascism.  It needs to be defeated.’  Nowadays, conflicts are never-ending and it all seems very murky.  I think it’s very difficult for people to understand what’s going on with politics and different cultures.  In some ways, we know more about the world than ever before but I think that frightens us. Television at least partly reflects that.” 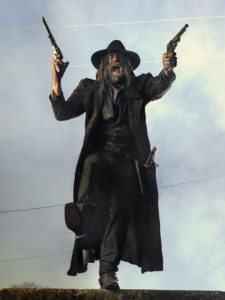 As Season Two unfurls, McTavish insists that the show will feel a lot more like the original source material than the previous season.  With last year serving as almost a prequel to the comics, Season Two sets out with Jesse and Co. on the open road, searching for God.

“It’s very much more the road trip and really where the comics begin,” McTavish explains.  “Anyone who’s read the comic will recognize the world that they all live in now in Season Two.  We’re introducing the audience to all sorts of unusual situations [and characters].  I won’t spoil it but they are great.   In true Preacher form, I would read every script.. and there would be moments where you say I cannot believe they’re going to do that.  And yeah, they do!  It’s totally unpredictable… I think that’s one of the huge strengths of the show where there’s a moment in every show where the audience says ‘I did not see that coming!’  And that’s rare.  We’re so familiar with the conventions and the language of television that surprising the audience is hard and I think we did that very well.”
Preacher: Season Two premiered on AMC on Sunday, June 25th and resumes in its regular timeslot on Monday, June 26, 2017. 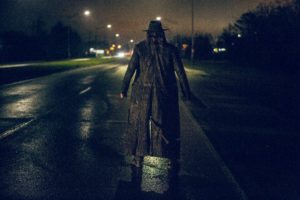