You are here: Home / Current Events / Mystery Science Theater 3000: The Return – Appreciating the Good (and Bad) 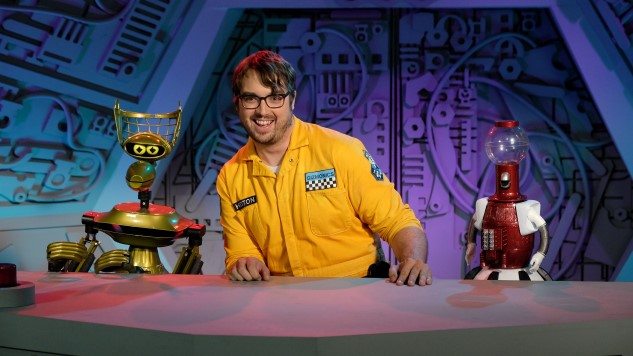 A large portion of my cultural knowledge came while attending graduate school. One of my classes involved watching classic films such as Crimes and Misdemeanors and The Godfather, analyzing them for their relation to aspects of the Christian faith. Friends introduced me to the Claymation short films of Nick Park one evening (specifically those involving Wallace and Gromit).  Another student in my department talked glowingly about a series called Mystery Science Theater 3000 that poked fun of horrible films.  This concept sounded interesting, so my roommate and I invited a friend over to watch Joel and the bots skewer Manos: The Hands of Fate. It was oddly fascinating to see the effect witty commentary had on one of the worst films in history (the guy we invited over actually fell off the couch from laughing so hard).  Since then, I’ve enjoyed an occasional foray into the world of MST3K.  The series ended in 1999, but devoted fans kicked in over $5 million dollars to have a new season created (currently on Netflix as Mystery Science Theater 3000: The Return).  For the most part, it’s as if the gap of seventeen years didn’t exist—and this is a great thing.

For those who are unfamiliar with the concept of MST3K (as it’s commonly known), here’s a quick primer: an unwitting human (in this case, Jonah Heston [Jonah Ray]) is forced to reside in a bone-shaped spaceship called the Satellite of Love by some mad scientists (Kinga Forrester [Felicia Day] and TV’s Son of TV’s Frank [Patton Oswalt]) as part of an experiment: How much can a person deal with when it comes to watching horrible films?  The answers are revealed as the subject and his robot friends (Cambot, Gypsy, Crow [a gold-plated wisecracker voiced by Hampton Yount], and Tom Servo [gumball machine body and all played by Baron Vaughn]) endure horrible film after horrible film, seen only as silhouettes sitting in the front row of a theater. There is some interplay between the Mads and Jonah, and that’s about it. 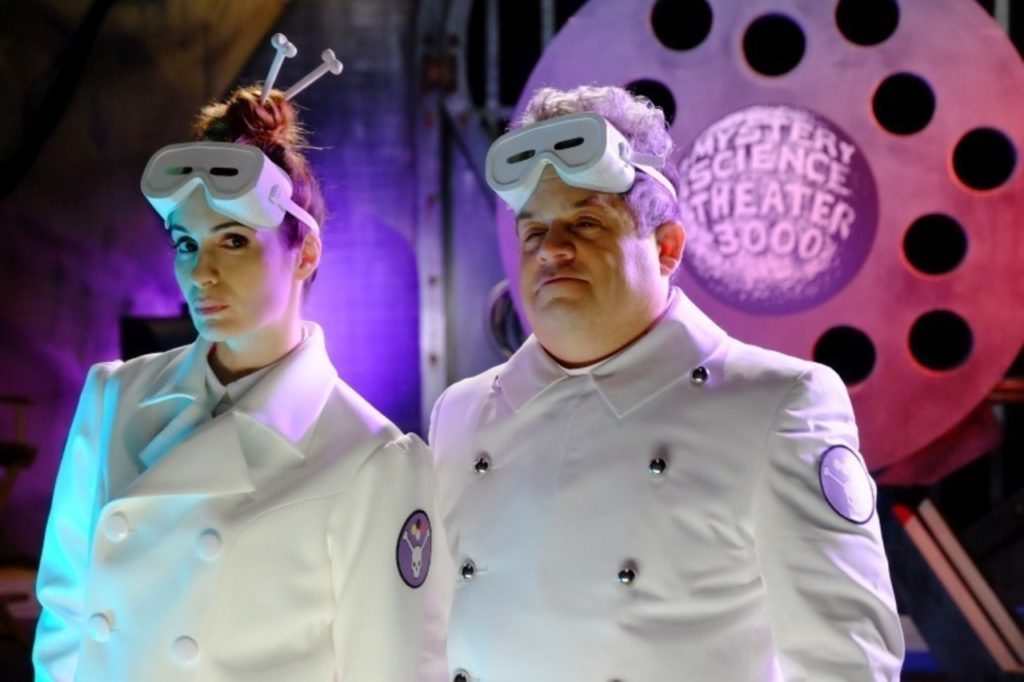 There are definitely some changes between the old episodes and the new—Crow has movable arms; Tom Servo can fly in the movie theater; the Mads’ base is on the dark side of the moon; and the jokes come quicker.  As with the older episodes, each will take multiple viewings to pick up on different aspects of the commentary, ranging from Aeschylus and Shakespeare to Facebook and Temple Run.  You’re not going to get it all on a first viewing, so sit back and enjoy the films as best you can.

As for those films . . . MST3K has always prided itself on picking non-mainstream films to make fun of, and this season is no exception.  At this point, I’ve seen the first four episodes, so here’s what you can look forward to:

* Ep 1 – Reptilicus: It’s a Godzilla-like film that takes place in Denmark with wooden dialogue and some laughable graphics—as an example, two of the monster’s human victims look like they were excised from a flannel board.  After about 20 minutes finding their footing, Jonah and friends begin to get into a rhythm.

* Ep 2 – Cry Wilderness: Imagine a forest with wolves, eagles, raccoons, and tigers.  Add in a sunburnt, badly costumed Bigfoot and a kid who runs away every thirty seconds, and you can imagine the result.  I thought the tiger sequence involving the jeep was classic.

* Ep 3 – The Time Travelers: A bunch of scientists jump a century into the future, only to find some ugly android creations and mutants.  Danny, meanwhile, is too focused on the future women.  If I was on the Satellite of Love, I might’ve pleaded for mercy after this one.

* Ep 4 – Avalanche: Poor Rock Hudson and Mia Farrow—their chemistry is completely nonexistent (I think he’s still trying to fufill that lunch date). It’s a horrible sign when an avalanche is the most memorable character in the film.  Crow gets in a zinger while the snow falls: “Just when you thought this movie couldn’t get any whiter…”

As is typical for MST3K, some of the jokes fall flat, but others are fantastic.  Your experience will vary, of course.  The more you’ve invested in the series, the more you’ll be rewarded.  There are also cameos by famous actors sprinkled into the season (one sings a duet with Day in the fourth episode)—see if you can spot them.

One thing I’ve come to appreciate from viewing episodes of MST3K over the years is what it takes to make a good film.  There must be a convincing plot, actors and actresses willing to invest in the film emotionally, quality camerawork, and realistic sets/backgrounds.  If any one of these is not present, the movie will not work as intended (and could become fodder for a new season of MST3K, should more be created).  A beginning filmmaker would be wise to consider examples of what comprises a good film—and what doesn’t—in order to get the full perspective. If anything, God wants us to learn from our mistakes instead of repeating and perpetuating them across generations, as the Israelites often did (see Isaiah 1:10-20).  If we can do this, our lives will provide encouragement and purpose the whole world can see and appreciate.  Appreciating the bad can truly be a good thing!