You are here: Home / Film / Hail to The Post: 1on1 with Bruce Greenwood 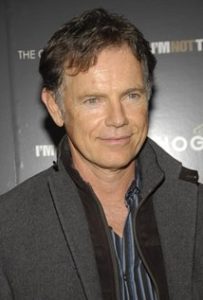 Set in the later years of the Vietnam War, Katherine Graham, publisher of the Washington Post, and her editor Ben Bradlee (Tom Hanks) suddenly find themselves in the possession of papers exposing the American government’s cover-ups. As her shareholders are growing anxious and question her ability to lead, she and Bradlee must decide whether they will put their careers—and lives—at risk by publishing the truth that they have uncovered in an effort to hold their elected leaders accountable for their actions.

Directed by Steven Spielberg and featuring an all-star cast, The Post brings a key moment of American history to life that showcases the damage that can be done to our culture through the misdeeds of the administration. Playing former Secretary of Defence, Robert McNamara, in the film, veteran actor Bruce Greenwood felt it was quite an honour for Spielberg to consider him for the role. 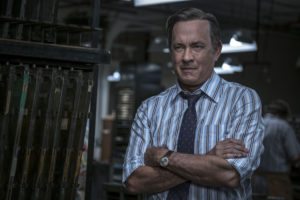 “It was just one of those miraculous things about planets aligning,” he begins, “and, for some reason, Steven thought I was the man to invite. He called me and said ‘Would you like to do it?’ and when I picked up the phone from the floor (laughs), I said okay!… We’d had a few brief conversations but I wasn’t that sure he even knew who I was. It was doubly surprising that he reached out to me for this. Then the research began and the conversations began. You get to the set and you look at the call sheet and the call sheet is a list of people that you could only dream to work alongside.

Greenwood’s enthusiasm for The Post is palpable, but he is far from alone. The film has an energy and heat emanating from the cast that is visual from beginning to end. Greenwood claims that the earnestness of the film stems from the current political climate.

“I think that Amy Pascal became aware of Hannah’s script, and it was a passion project. When she took it to Steven, it really began in earnest,” he recalls. “I think he had a project that he was in the midst of getting in motion and he felt strongly, from what I understand, that now was the time and not a moment too soon to make a movie about this. That urgency coupled with the political passion of everyone involved… but I don’t know if it’s just a political passion but a desire to do right by this country to remind everyone that democracy is a fragile, fragile bubble. It doesn’t take much to puncture it.”

However, Greenwood also contests that is importance of the film goes beyond simply the personal passions of the cast. Rather, 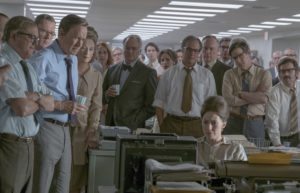 the significance of these conversations relates to the heart of the current battle for truth itself.

“It’s the attempted smothering of the press and the maligning, the mocking, the calling into question the veracity of things being
reported on by the current administration [that makes this film so vital],” Greenwood explains. “If an administration chooses to malign, mock, diminish and otherwise impugn truthful reporting for long enough, eventually people may throw their hands up and say, ‘I can’t believe anything at all’. Then, the control of the press has been won over in that way. We the people are entitled to the truth but we don’t get it for free. We have to work for it.”

Given the current battle over the nature of truth, Greenwood is unsure what steps need to be taken in order to repair the damage that has been done in our culture when it comes to civil discourse.

“That’s a long question that requires a lot of dialogue to tease out the answer. A lot of news is incredibly partisan and the echo chambers that we all inhabit, to some degree, are dangerous places. I wish I had the answer to how we create civil discourse that allows penetrating reporting to keep us informed.” 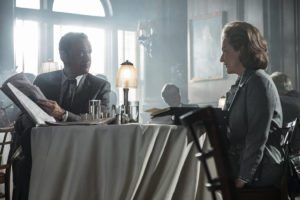 One of the greatest strengths of The Post is the overall quality of the script. Although much of the film focuses on conversations as opposed to action, it’s astonishing how gripping the story becomes. Having found himself involved in a number of amazing projects over the years, Greenwood–who also stars in FOX’s upcoming medical drama, The Resident–feels that it’s that quality of writing that helps him know that he’s found a great script.

“The first clue is that you want to turn the page,” he clarifies. “That was what was so remarkable about this is that, even though I
knew the story at large and what was going to happen at the end, I was fascinated at how [writers] Liz Hannah and Josh managed to pull together all these arguably dry details into something in which every character had a passionate point of view and was pursuing that point of view with everything they had. This could’ve been told half a dozen different ways and not been nearly as compelling but they have a gift for endowing characters with an emotional point of view while their giving you information that you might otherwise is just plain information.”

“I think the perfect example in this movie is when Sarah Paulson, who plays Ben Bradlee’s wife, tells him what bravery is and puts in in the context of all the things that Kay Graham was up against to be taken seriously and in order to be heard. That can be just information but it was anything but information. It was a passionate pan from a woman who ultimately left her husband, describing the station of women at that moment in our history.”

Of course, his role as McNamara is far from Greenwood’s first opportunity to bring a historical character to life onscreen. Having 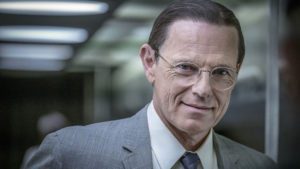 played such real-life characters as John F. Kennedy and Jack Dunphy, Greenwood recognizes the amount of collaborative work that goes into preparation for these roles.

“[I do] a lot of reading, watch a lot of film and I continued to read throughout the shoot,” he recalls. “Of course, when you get onto the set, everyone is infused with information from their own research. Then, you start cross-referencing quotes and people and points of view with the other people that have been working on the movie and have done equivalent amounts of research that have been focused on other things. So, the dialogue at work was constantly about ‘Oh, did you know this? Did you know that?’ There was a tremendous about of cross-referencing information between all the people working on the movie. Everybody, right from the top of the call sheet to the last on the list, was made to feel like we were doing something that had to be done and had to be done right now.” 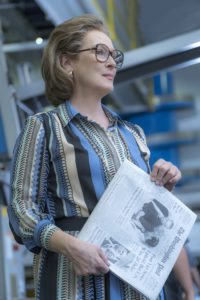 Though re-creating a historical figure onscreen can be intimidating, he also claims that there is room for an actor to bring their own perspectives to the role as well.

Says Greenwood, “I don’t think you can help but bring your own perspectives into the performance and the idea of being able to recreate somebody in a whole way will drive you mad. I can only hope to find a couple of shapes and colours in the kaleidoscope of who they were and hope that that reflects something of who they were and what they represented. I will say that, while I was talking to Carl Bernstein last night that, unsolicited, he said that watching Meryl Streep was like being in a room with Kay Graham. Some actors can do that utterly. Other actors like myself can only attempt. She’s otherworldly.”

Although McNamara would be considered one of the ‘villains’ of The Post, Greenwood believes that, despite his wrongdoing, that he still is a good man overall.

“I think he made some profound mistakes and was profoundly misguided,” he feels. “His mea culpa at the end of his life doesn’t absolve him of his responsibility of what happened in the 60s in Vietnam. But, to impugn him as a man for his profound missteps, [is] not for me to say.”