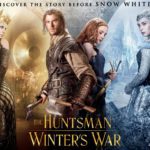 Cedric Nicolas Troyan, who was nominated for an Academy Award for Best Visual Effects on Snow White & the Huntsman, directed The Huntsman: Winter’s War out now on Digital HD (and on Blu-ray on August 23). After directing Chris Hemsworth, Jessica Chastain, Emily Blunt, and Charlize Theron in his debut, Troyan shared his thoughts on conveying strong visuals,… [Read More]