You are here: Home / DVD / Suicide Squad: Hell to Pay 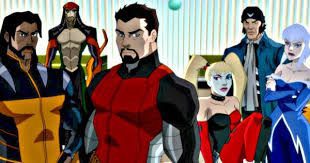 Now this is what the feature-length, live-action version of Suicide Squad should’ve looked like: an angry, battling, spiritually-aware group of misfits and criminals who claw their way through all of their mistakes to find a taste of redemption on the other side.

Funny, creative, and more grounded in the original comic book source material, DC’s feature-length animated film Suicide Squad: Hell to Pay is a purely adult film that bashes in the head of what you think about superheroes with a more cohesive storyline than the film you saw in theaters. Amanda Waller (Vanessa Williams) sends Deadshot (Christian Slater) and his crew of villains after a card that gives a one-shot chance at bypassing Hell and making it to Heaven.

Battling the likes of Vandal Savage and other villainous types, Deadshot and his cohorts find themselves facing down evil-er baddies and deciding what they’ll do with a one-way ticket to heaven. It’s surprising, and a bit heartwarming, even while it’s violent, sacrilegious, and hilarious, too.

For those fans digging more, there’s a special look at the next animated film (The Death of Superman, gasp!) and a bunch of behind-the-scenes on Deadshot (“Nice Shot, Floyd! The Greatest Marksman in the DCU,” who might be the villain with a heart of gold) and “The Power of Plot Devices, MacGuffins and Red Herrings.” Sure, you can roll out to see Infinity War in theaters, or you can tackle this gem from the comfort of your own home.