You are here: Home / Film / Love in the Modern Age: 1on1 with Mike Roma (director, DATING MY MOTHER) 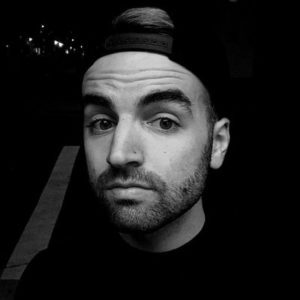 Written and directed by Mike Roma, Dating My Mother tells the story of Danny (Patrick Reilly), a young queer male returning home to life with his mother in New Jersey. Having spent the last few years living freely in Los Angeles as a writer, Patrick finds his homecoming a mixed bag of emotion. While he appreciates his mother’s willingness to take him in and sees their relationship deepen, he also feels stifled living in a more conventional environment. When asked where the idea for this particular film has come from, writer/director Roma claims that the film stems largely from his own experience.

“It’s actually an autobiographical story,” he recalls. “I had just finished up school and moved back home to New Jersey to live with my mom in my hometown. I just wasn’t sure exactly what I was going to do with my life and, as I was doing that, I had this idea, looked around me and saw the relationship I had with my mom that was once close and had only gotten closer since we were living together again. I just thought it’d be fascinating to explore that on film.”

“I think that, being a queer person who really found himself once he left the bubble of the suburbs, explored his identity and the way that he presented himself, that I wanted to show on film. I wanted to show the return of this fully realized queer person going back to their hometown, which is very [traditional, like] the white picket fences, identical homes, identical people and standing out. I call it being a ‘rainbow sheep’. So, there’s that tension of not belonging and feeling trapped because it’s almost like they’re going back in the closet. Some part of you has to be just checking yourself in a way that maybe you wouldn’t normally have to in a big city.”

For the character of Danny, Roma was looking for someone who could develop the character in an authentic and honest way. In the end, he found those qualities in Patrick Reilly. Having worked together on Roma’s previous series, Danny the Manny, Roma has come to love working with Reilly insofar as they understand each other’s voice and collaborate well in bringing characters to life onscreen.

“I think we both have very similar voices, he as an actor and a performer and me as a writer,” he feels. “Whether that’s [because] we had some similar experiences growing up, I just think we have a very similar perspective on the world. I liked hearing the way he delivers my words, too. We’re at the point now where I really enjoy writing for him, because he knows how to take a line and deliver it in a way that is so true and honest and unexpected in a way that I would never have gone to read the line. He pushes the writing in a way that I didn’t anticipate and I think it’s better. I think we understand each other’s voices and we have each other’s strengths. Our script supervisor saw the two of us looking at each other and he took a picture, put it on his snapchat. Then, he made a Venn diagram between the two of us, putting me on one side, Patrick on the other side and then in the middle was Danny. We know how to composite characters together and give parts of ourselves to the character. Different parts.“

Understandably, the character of Danny feels stuck in his new environment, battling feelings of ennui and malaise in the more conventional New Jersey atmosphere. When asked what he believes Danny is looking for, Roma feels that his journey is a quest for love and acceptance.

“I think [he’s looking for] connection,” he says. “I think that ultimately everything comes down to wanting to be loved and to 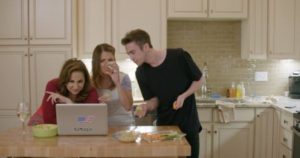 be able to give to others. And I think the story’s about losing the connection with someone else in order to find new ones. Relationships changing and developing and a real coming of age. I think this [film] is about those growing pains in terms of relationships.”

Throughout the film, one of the more interesting story choices comes as Danny’s journey is juxtaposed against his mother’s own quest for love in a way that showcases their differences. For Roma, this decision to compare generations highlights their contrasting uses of technology and expectations in the modern dating world.

“As an artist, it’s important to find the gray areas,” he begins. “So, I don’t think it’s a clear [that] one generation is this way or the other, but from my perspective and my experience, the younger generation is much more likely to… I mean, [using technology] is like a game almost, right? It’s literally on the same device that you’re using to play Candy Crush. You’re looking for this like very strong connection and also, you just got 10,000 points. It’s so easy to make a game of it and to dismiss people just based off of appearances and everything. To an older generation, I mean, Mom’s use Facebook more than anyone else, right? And they’re really using it to talk and connect with people a maybe my generation is more about branding and sort of putting out a persona as opposed to just living your life through it. “ 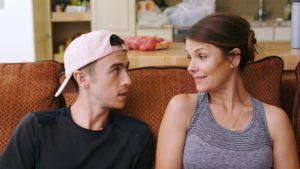 “So, I think [that], with June’s character, [she finds] someone and really [falls] for them, [and it’s] someone that isn’t necessarily perfect. I think that when you see the character Chester (James Le Gros) for the first time, that’s sort of an unexpected choice for Joan, but I wanted to show that it’s someone that wouldn’t necessarily be obvious on a dating app. You’re just judging to get past that surface level of judgment and [hopefully], really connect with them in real life.”

While he doesn’t believe it’s necessarily either good or bad, Roma does believe that technology has changed our understanding of relationships, especially in the way that we view one another.

I think it has, for better or for worse,” he considers. “I don’t think it’s all negative. A lot of people are connecting and it’s doing a lot of good, but it’s definitely changing [things] in whatever way. I think for some people it’s bad. I think that with any change there’s a negative underbelly. Before the industrial revolution, we didn’t have to worry about global warming, but we did have to worry about all of the things that we consider a basic, like heating. With online dating, maybe we are judging people on a surface level, but we are making more connections now. Can we make them as deep? Well, I think that’s based off the individual.“

In one of the film’s best casting choices, Roma invited veteran actress Kathy Nijimy to play the role of Joan’s friend, Lisa.

Bringing her signature joy and humour to the role, Nijimy lights up the screen in a way that only she can. For these reasons, Roma felt that she was the perfect choice for Lisa as he was writing the script.

“I actually wrote that role with her in mind,” Roma clarifies. “I’ve always been such a fan of hers and she’s hilarious. When I was writing this character, I thought of who she would take after in my head to make that [character] feel more alive. With Lisa, she really stayed as Kathy the whole time. So, when I got around to casting, I had one choice for that role and wrote her a letter along with an offer and the script and she resonated with the material. She was actually the first one to sign off with the project, which was amazing. It’s definitely put me at ease for the rest of the process. In some ways, I felt that it was a nice omen, a good omen.”

Taking on the dual roles of both writer and director, Roma values highly the opportunity to bring his own thoughts and feelings to life onscreen. While he’s interested in using other people materials in the future, he ultimately feels that the experience of using his own voice allows him the chance to connect more deeply with the material

“I do like to do both [writing and directing], but I view them as such similar things because they both are writing, just in a different way,” he explains. “One is writing on your own and sort of pulling from all of your experiences and from the ether. It can take a lot of time. I view directing as problem solving writing. It’s a little bit more practical and it’s more collaborative… That being said, it’s fun to direct material that I haven’t written but I find that I associate the two so closely in terms of the work that I prize the most. What brings the most joy to myself is definitely the one that I both write and direct.”

To hear full audio of our conversation with Mike, click here.

Dating My Mother is available on VOD now.