You are here: Home / Current Events / Landing Up: Looking for Home 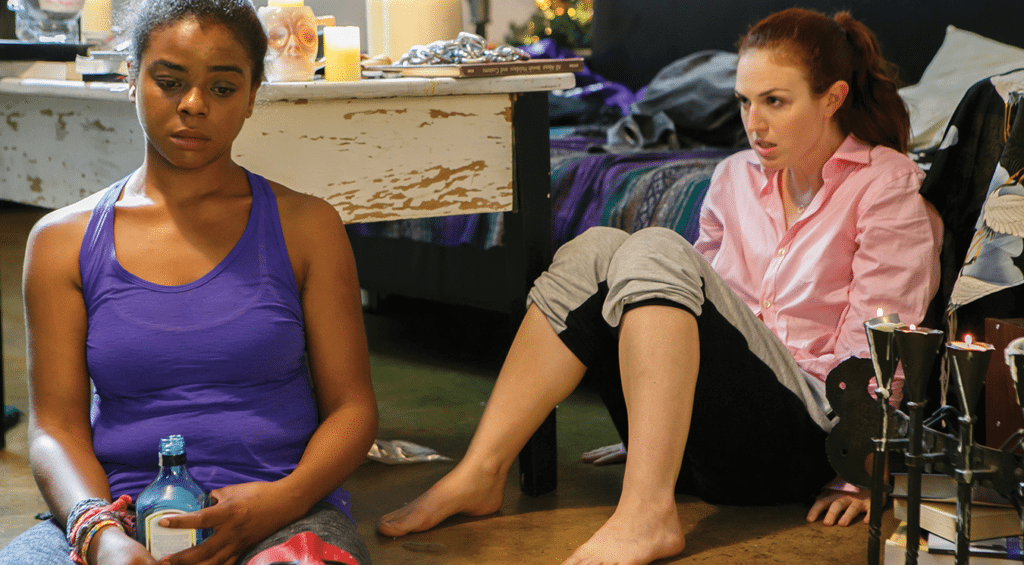 Life in the 21st century is vastly different than it was even a generation ago.  We can communicate with people around the globe instantly using wireless technology.  Social media has allowed people to crowdsource their opinions and direct changes in everything from parenting to government. Some cars on the road can now drive themselves without any input from a human.

However, some things remain the same. Humanity still cannot teleport à la the video game, Halo, American Idol is still on television, traffic jams are still a way of life and people are still homeless, whether by situation or choice. In fact, the National Alliance to End Homelessness says that in 2017, an estimated 553,742 people were homeless on any given night in America.  That’s a pretty staggering number.

But what would you do if you were homeless and had to hide it in order to have a dream life with the one you love? In the film Landing Up (out today on DVD and VOD), director Dani Tenenbaum explores this concept in the form of Chrissy (Stacy Maltin) and her friend Cece (E’dena Hines).  It’s a dark, gritty film that explores the underbelly of homelessness, eventually leaving the viewer with a nasty taste in their mouth.

Chrissy and Cece look like two normal individuals that you’d encounter at the grocery store, but homelessness is a reality the two constantly experience. Chrissy and Cece are doing everything in their power to save up enough money to acquire their dream home—an apartment that the two can call their own.  Living In New York City, this is far from an easy task. People are always desiring places to live, and as a result, the prices of residences are beyond exorbitant. What can Chrissy and Cece do?

The answer is not what one would immediately expect. Chrissy takes menial jobs passing out flyers for a comedy club. She and Cece sit on the street and panhandle. And they take advantage of people who see them as attractive, resorting to prostitution to not only make money, but have a roof over their heads for one evening.  In fact, Chrissy keeps a journal with the names and numbers of guys she’s picked up—along with unique names she’s given them for herself (Callie; Katie Jo; etc.).  Cece has only known the homeless shelter and is in a relationship with an extreme control freak who hurts her constantly—yet she keeps returning to him time and time again. Of course, the homeless shelter is an option, but even things aren’t what they seen there. 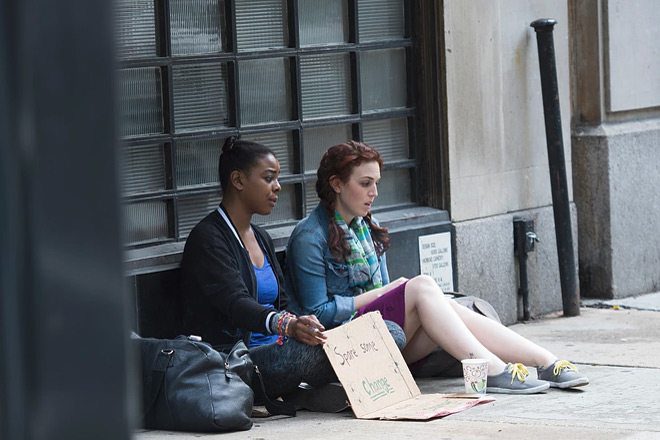 Chrissy meets David (Ben Rapoport) while sitting under a tree under the park one afternoon, and the two develop a relationship immediately.  However, this isn’t the normal type of one-night stand Chrissy is used to; she loves David.  He’s a brander at an advertising firm and shares an apartment with another guy, who is suspicious about Chrissy from the outset.

The questions are many for Chrissy: How long can I put up a fantasy so I can perhaps get out of the homeless life?  Will I be able to trust David with my secret?  How will he respond to the knowledge that he’s dating a homeless person?

Maltin does a great job as Chrissy, trying to figure out how to balance homelessness with a life she’s only dreamed of.  She’s strong, vulnerable, and conflicted—sometimes all at once. Hines, in her last performance before she was brutally murdered (5 Flights Up, in which she played Morgan Freeman’s granddaughter), presents a caring hand and sympathetic ear while developing her own brand of inner fortitude and endurance. But to make the film work, Maltin and Rapoport have to look the role of a couple—and they do this quite easily.  Tenenbaum’s ending, however, is jarring in that Chrissy’s revelation of homelessness to David occurs indirectly—and in the final seconds of the film.  It feels like a cop-out.

One poignant scene in Landing Up worth discussing involves Chrissie confiding to David after he confronts her about a video of Chrissie he saw on the internet. She deftly defends herself, then tells him, “My parents said I was unsaveable.”  I sincerely wanted to cry when I heard that.  The truth is quite different in real life.  We don’t always get to choose the circumstances of our lives, but we can do our best in the meantime.  Thankfully, nobody is beyond the reach of God and his love.  The prophet Hosea put this on display when he was told by God to marry Gomer, a prostitute.  She bore him three children, then ran away to another man.  Instead of completely cutting ties with her as a result, God told him to get her back. Hosea gathered up some funds and purchased Gomer again, this time telling her, “You shall stay with me many days” (Hosea 3:4a NKJV). The point is that even when we’re far away from God, doing everything possible to stay out of his sight, he has a long enough arm that can gently reach out and bring us back to him. And just like Hosea, he bought us at a great price in the form of Jesus’ death and subsequent return to life.

May we remember that even in our worst days, God is never far away.  We just have to talk with him.  And thankfully, that has remained the same throughout the centuries.

A WORD OF CAUTION: Landing Up is well-constructed and paced, but it is not a film for the family.  As of my screening, it did not have a rating, but I would give it a hard R at the least.  When you’re dealing with the subject matter in the film, lots of swearing, drinking, and racy scenes will occur—and they are on full display.