You are here: Home / Film / Is That a Gun in Your Pocket? 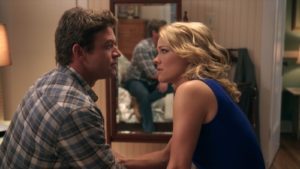 In Is That a Gun in Your Pocket, a war between the sexes breaks out in little Rockford, Texas (population 6,969, “Live Free. Shoot Straight”). This is a town with a strong gun culture. We see the theater marquee for the Rockford Film Festival which is screening Naked Gun, Naked Gun 2.5, Top Gun, Young Guns, and The Guns of Navarone. It seems that everyone has guns in this town. But an accidental school shooting prompts Jenna Keely (Andrea Anders) to ask her husband Glenn (Matt Passmore) to give up his guns. When he refuses, she starts a campaign with the other women in town to withhold sex until the men get rid of all the guns in town. Soon the town is divided along gender lines with no one finding much satisfaction.

The film seeks to be a satirical look at the gun control debate. Some of the film gives some of the arguments in support of fewer guns, but no real effort to reflect the thinking of Second Amendment advocates. The organization that serves as a stand in for The National Rifle Association is willing to bring in a truckload of prostitutes to keep the men happy and later to straight out bribe the city to keep guns. 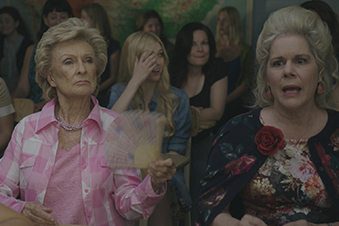 The film is mostly lots of uninspired sexual humor that relies on tired gender stereotypes. There is no real light shined on either the issue of guns in society or on the sexual mores or behaviors that seem so ubiquitous in our society.