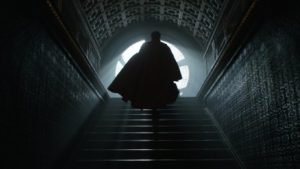 “You’ve spent your whole life looking through a key hole.” – The Ancient One

When Robert Downey Jr. first brought Tony Stark to life in 2008’s Iron Man, none of us had any idea that we would be this far down the proverbial Marvel ‘rabbit hole’ at this point. A mere eight years later, we have seen everything from shrinking ex-cons to hammer-wielding demi-gods to talking raccoons do battle on the big screen and, over that time, I had become fairly convinced that Marvel Studios simply had no surprises left.

Dr. Strange has proven me wrong.

Dr. Strange enters another hero (are there any left?) into the Marvel Cinematic Universe by introducing Dr. Stephen Strange (Benedict Cumberbatch), a brilliant—but arrogant—surgeon. When a tragic car accident leaves him unable to practice medicine, he becomes emotionally lost and searches for answers amongst the mystics of the East. Learning from his otherworldly mentor, The Ancient One (Tilda Swinton), Strange’s eyes are opened to the spiritual realities around him. Then, when a former student of the Ancient One threatens Earth’s balance of power, Strange is forced into a battle that he never sought out but of which he finds himself in the middle. 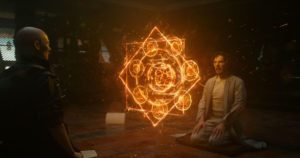 Directed by Scott Derrickson (Sinister, Deliver Us From Evil), Dr. Strange gives the veteran director the daunting task of creating a visual atmosphere that is both terrifying and beautiful at the same time. Largely known for his horror films, Derrickson was clearly given the keys to the Kingdom regarding his special effects budget yet he manages to create this CGI wonderland in (sorcerer) supreme fashion. While the film’s visuals will undoubtedly be compared to other sci-fi entries such as Inception, The Matrix and even 2001: A Space Odyssey, Derrickson’s spin on the film is nonetheless both dazzling and unique.

The film has drawn several comparisons to Iron Man for its tale of the redemption of the powerful—and that’s not inaccurate. (In fact, given the quality of some of the other Marvel entries, it’s actually a high compliment.) As Stephen Strange, Cumberbatch delivers a solid and charaismatic performance (though they don’t give him much to work with in terms of the character’s depth).

Still, the real surprise of the film for me was its unabashed conversation about spirituality.

While it seems obvious that a film that includes magic and Eastern philosophy would contain some discussion of faith and believe, what really struck me was how enthusiastic about it. As the film opens, Strange himself has a very strict scientific mindset, believing only in his own abilities as a surgeon. When that worldview is threatened by the mysticism of the Ancient One, he exclaims, “There is no such thing as spirit. There is only matter!” His is a heart hardened by knowledge and self-amazement. 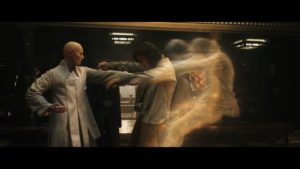 However, after The Ancient One opens up his eyes—ever so briefly—to the world beyond his own understanding, Strange is completely transformed. For the first time, he recognizes that he is not the most powerful force in the universe.

And he is completely awestruck by it.

In the story he tells, director Scott Derrickson doesn’t just dip his toe into the idea of a larger spiritual reality, he dives in headfirst. In Dr. Strange, he demonstrates the supernatural to be something that actually has a vested interest in protecting the lives of the people, even if they continue about their lives blissfully unaware. (After all, like Strange himself, they too have ‘spent [their] whole lives looking through a key hole.’]

As a pastor, this depiction of belief strikes as a cinematic representation of ‘he who has an ear, let him hear’, as all are called but few are interested in seeing beyond their own world. Like Strange, we too can often become so wrapped up in ourselves that we miss the calling to experience the Kingdom beyond us.

Like Strange, we too need to be humbled and shaken from ourselves.

If we are, maybe we’ll be able to see beyond the key hole for the first time. 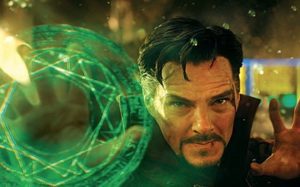