In a wild left turn for the DC film universe, director Todd Phillips’ latest film JOKER takes us back to Gotham City in order to witness the birth of the Clown Prince of Crime. When we first meet the titular villain, his name is Arthur Fleck, a failed comedian who has been isolated, bullied and disregarded by society. As things begin to unravel in his life (and his mind), Fleck begins a slow descent into madness as he transforms into the iconic DC villain known as the Joker.

This week, in our 100th episode, our SF team tells us what the site means to them, we announce a VERY special giveaway and Paul and Julie Levac stop by to talk about the dangers and brilliance of Todd Phillips’ foray into criminal madness.

You can also stream the episode above on podomatic, Alexa (via Stitcher), Spotify or Soundcloud! Or, you can download the ep on Apple Podcasts or Google Play!

GIVEAWAY! In order to enter our giveaway for a $100 gift card for the movies, please do the following:

Whatever one thinks about the city of Gotham, it always has the ability to get worse. In the case of the fifth season of FOX’s Gotham, the worst has come.

Five years ago, the show was unveiled as a view into the lives of Jim Gordon (Southland’s Ben McKenzie) and teenage Bruce Wayne (David Mazouz). Now, we find Wayne on the cusp of becoming the Batman, as the twelve episodes conclude the prequel of what Wayne/Batman will become under John Stephens’ direction. With nods to the arcs No Man’s Land (Greg Rucka, Jordan Gorfinkel, Chuck Dixon) and Zero Year (Scott Snyder, James Tynion IV, Greg Capullo).

In both cases, the absolute desolation of Gotham is evident, as the city is cutoff from outside help and left to … die. Criminals run rampant, in this case, Scarecrow, Riddler, and even Bane. While everyone is in the same boat (isolated, and cut off), the responses vary – do you help others or do you take advantage of the situation?

This is a battle to end all battles (except it’s not… it’s setting up what we already know about Batman) with a dark, dark, dark backdrop to who Bruce Wayne has become. And that’s saying something if you consider he’s an orphaned kid raised by his butler.

Special features include unaired scenes, a deep dive into the villains (“Modes of Persuasion”), the best moments of Comic-Con 2018, “Gotham: A Modern Mythology,” and “Gotham’s Last Stand.”

Warner Bros.’ Doom Patrol serves up strange, mangled delights that put the “anti” in anti-hero. The group was teased out of Titans, a clearly adult take on a group that’s no longer teen-affiliated, and just enough of their banter was shown to make me re-up for some more viewing.Where can you see an angry teenager with sixty-four completely different personalities, a half-robot, half-human cyborg with anger issues, a Tin Man-like former NASCAR driver with a sailor’s mouth, a woman who can’t control when she expands or shrinks, and a man who is haunted by an extraterrestrial power deep dive “down” into a donkey to save their not-so-beloved leader from the legacy of the Nazis? Why, the DC Universe of course!

Niles Caulder AKA The Chief (Timothy Dalton) has “rescued” a collection of oddities, freaks, like Robotman (Brendan Fraser), Elasti-Woman (April Bowby), Crazy Jane (Diane Guerroro), and Negative Man (Matt Bomer), as well as Cyborg (Joivan Wade). They hang out together in Doom Mansion, kept alive but not really living, tortured souls isolated from the world. But when his archenemy Mr. Nobody (Alan Tudyk) causes Caulder to vanish, the not-a-team rolls into action at Cyborg’s assistance, unsure of what to do and unready to be heroic.

While Watchmen comes to mind for the violence and profanity, or the weirdness of The Umbrella Academy, Doom Patrol does super powers in a way that defies comparison. It helps that this is a hilarious show, one full of DC-inflected self-references and side barbs, of ridiculous mishaps (remember the donkey?) and witty banter. It’s narrated by the villain, nostalgically shot, and constantly poking our expectations for how heroes could and should behave. It’s developed by Supernatural, Being Human, and Frequency creator Jeremy Carver, and it’s clear that there’s a mashup of genres that defy categorization. 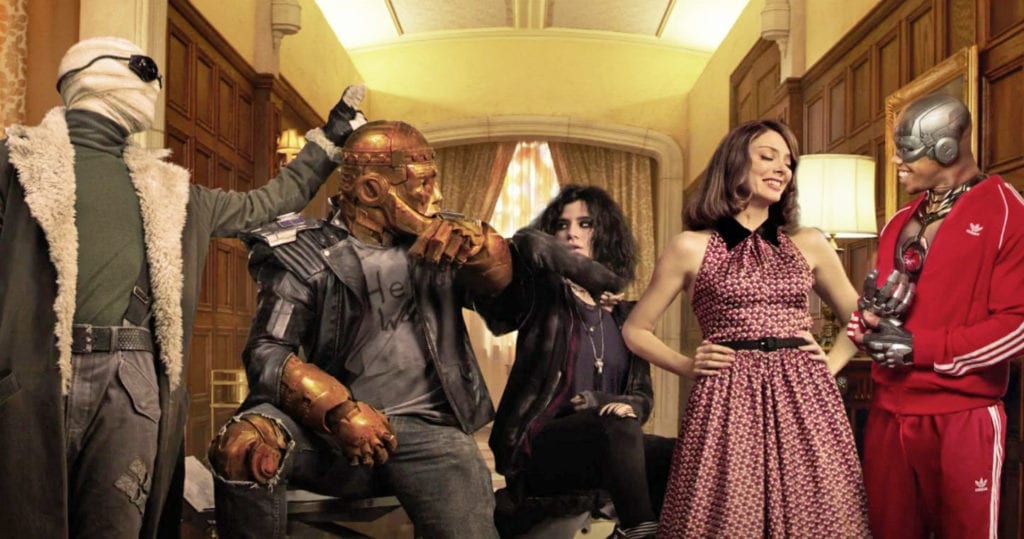 But don’t believe for a minute that this is simply silly or throwaway entertainment. There’s something deeper hinted at in the back stories of several of the characters, mentioned in flashbacks and in passing that builds what these characters are and can be because each of the Doom Patrol’s “gifts” actually feels like a curse, somehow tied to the issues that they experienced before receiving their powers. Robotman was a pleasure-seeking Neanderthal who now can’t feel anything physically; Elasti-Woman was an appearance-based actress who now can’t hold it all together; Negative Man was a married father engaged in a homosexual affair who now can’t get close to anyone. But can they all find “space” together? Can they create something new and powerful beyond their disparate individualism?

Several episodes into the show, I can’t wait to see what happens next. There is something universally dynamic about battling Nazis – think Captain America or Indiana Jones – mashing up the old and the new in a creative blend of awesome. The show just keeps ratcheting up what it’s meta-story will be, beyond individual episodes that entertain and amaze, drawing the audience into the an emotional desire to find resolution. I still doubt that we’ll see anything cut and dry here because what would be the fun in that? But there is sure to be an emotional payoff. Maybe in the end, we’ll see that our gifts aren’t what we choose, but we’re still responsible for using them wisely.