This week, Steve welcomes Alan Sharrer to talk about CARS 3, Pixar’s return to the world of… well… cars!  Lightning McQueen is slowing down and feeling the pressure to retire but does he have one last race in him?  The guys talk about the power of mentoring, legacy and personal value.  PLUS, their kids weigh… [Read More] 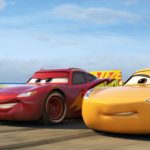 The film Cars 3 opens with a blank screen as Lightning McQueen pumps himself up for the upcoming race: “Speed. I am speed.” Sound familiar? 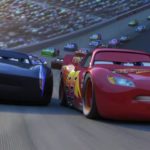 Over the years, the Cars franchise has been widely viewed as the flat tire of the Pixar world.  Despite decent reviews, the first entry remains one of the lowest financial successes in their canon (not counting merchandise, of course).  When the utterly unforgivable second film was released, the franchise found itself left in a twisted… [Read More]