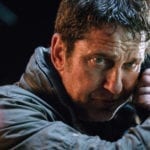 Angel Has Fallen sees the return of Secret Service agent Mike Banning (Gerard Butler) who is arrested after he is believed to be responsible for the failed assassination attempt of U.S. President Allan Trumbull (Morgan Freeman). After escaping from custody, Banning must evade the FBI and his own agency to discover the truth behind the attack…. [Read More]

It’s been awhile since Gerard Butler nailed his name to the blockbuster wall with 300. But in between making Fallen films about terrorists in the U.S. and London, he starred in the ensemble piece, Gods of Egypt, about the brotherly rivalry of the Egyptian gods Set (Butler) and Osiris (Bryan Brown), and the young passion of the human thief, Bek… [Read More]