When one thinks about summer films, the mind usually imagines superhero blockbusters and animated fare. But, sometimes, a film sneaks through that offers solid counterprogramming for those disinterested in revisiting the worlds of rampaging dinosaurs or villainous minions.

This summer, that film is Where the Crawdads Sing.

Based on the best-selling book, Where the Crawdads Sing tells the story of Catherine ‘Kya’ Clark (Daisy Edgar-Jones), a resourceful young woman who lives alone in the North Carolina marsh. When her boyfriend is mysteriously killed, Kya quickly becomes the prime suspect. While the townspeople quickly band against the ‘Marsh Girl’, local lawyer Tom Milton (David Strathairn) believes in the young woman’s innocenct and offers to represent her. As Kya unravels her complex story of growing up in an abusive home during a turbulent era, Tom works tirelessly to piece together the death of her former beau in order to save her from the death penalty.

Directed by Olivia Newman and produced by Reese Witherspoon, Where the Crawdads Sing is a brutal but beautiful story of one young woman’s journey to freedom. Beginning in the early 1950s and told mostly in flashback, Crawdads highlights the darkest parts of Kya’s journey. From her abusive childhood to her toxic relationships, Kya has struggled her entire life to trust anyone, especially men. Drowning in a sea of toxic masculinity, Kya has mostly seen the worst of men who have taken advantage of her. This has led to her inability to trust others, leaving her alone in a reclusive life in the marsh. While it’s often difficult to watch, Crawdads is strongly written and well-executed, creating a compelling character drama that’s wrapped in murder and intrigue

While Crawdads benefits from some solid performances, easily the star of the film is Edgar-Jones. As the emotionally-bruised Kya, Edgar-Jones portrays her character with a blend of shyness and inner strength. In essence, there is a gentleness about her character but also an inner fury. At the same time, Strathairn brings a sensitivity and stability to the film which carries it as the courtroom drama begins to take over. There’s simply a likeability about Strathairn that makes him instantly trustworthy. Paired with Edgar-Jones’ quiet rage, his gentleness and confidence helps balance out their pairing, allowing for some genuine chemistry between them.

At its heart, Crawdads is very much a film about finding one’s inner strength in the face of oppression. Known primarily as the ‘Marsh Girl’, Kya lives a life of seclusion. Although she yearns for safe community, the scorn of the townsfolk forces her to hide away in the solitude of her small cabin. At every turn, she feels the pressure of labels from townsfolk who are unwilling to get to know her. As such, even though she lives only a few miles away from them, Kya is viewed as an outsider. Because her life differs so drastically from theirs, they refuse to accept her and rumours begin to swirl about her. (Incidentally, Crawdads also manages to compare Kya’s situation with Jumpin’ and Mable, the African-American couple who have taken her under her wing. Set during a time of racial segregation, they too are viewed as outsiders from the white community that surrounds them.)

However, while others may view her as weak or insignificant, Kya maintains an inner strength. Though trapped in a white, male-dominated culture, she continues to fight against the powers that be. Men insist that they will take care of her yet she refuses. They are oppressive and abusive, but she has a strength that endures.

For this reason, there’s a beauty about the film. Kya‘s journey may be filled with pain yet it is also one of power. We empathize with her suffering but we also believe that she is resilient enough to fight back when necessary.

She has a heart of love but also of fire.

As a result, Where the Crawdads Sing has its own quest for justice. From Kya’s battle for freedom to Jumpin’ and Mable’s courage under oppression, Newman tells a compelling story about what it means to fight back when the world is firmly against you. Anchored by strong performances, the film hears the voice of the oppressed and invites them to tell their story of pain and suffering.

Because, like the Crawdads that sing from the depths of the marsh, they too must be heard.

Where the Crawdads Sing is available in theatres on Friday, July 15th, 2022.

Set against the vast expanse of the American West, Nomadland tells the story of Fern (Frances McDormand), a middle-aged woman who finds herself at a personal crossroads. Having recently lost her husband and her job, Fern decides that it’s time for her to start fresh by heading out onto the open road in her RV. However, as she explores the vast landscapes set before her, she quickly discovers that she’s not alone. Though she may move aimlessly through the seasons and seasonal jobs, she finds a new form of community amongst the like-minded nomads that welcome her home. As her soul is replenished, Fern also develops a relationship with David (David Strathairn), a man who may wish to play a greater role in her life than she’d initially expected.

Written and directed by Chloe Zhao (Songs My Brothers Taught Me), Nomadland is a stunning piece that honours the souls of those who go unnoticed by a society too busy to notice them. Filled with quiet and intimate moments, Zhao weaves a story of humility and grace that doesn’t merely attempt to entertain.

With an open style of filmmaking that ebs and flows with the surrounding landscapes, Zhao has created a story that moves like a traditional narrative yet feels true. By casting real-life nomads in key roles, she has clearly done her very best to tell a story that lives and breathes authenticity onscreen. (In fact, in order to help them gain a better understanding for the world they were bringing to life onscreen, Zhao even asked her cast and crew to live out of vans during the course of production.) Painting the lives of its ‘houseless’ characters with a loving brush, Zhao celebrates their pioneering spirit but also shows the challenges they face throughout their journey.

In many ways, Nomadland manages to highlight the overwhelming power of its surroundings yet never loses the value of every individual. Through his magnificent use of cinematography, Joshua James Richards reminds the viewer just how small they truly are when held up against the immensity of the American West. However, at the same time, when Fern encounters individuals along that way, they fill the screen in such a way as to acknowledge their importance.

Similarly the film’s central character, McDormand may be the biggest name within the film yet she plays Fern with such humility that she actually elevates those around her. Whereas many stars may look at this much screen time as an opportunity to put their talent on display, McDormand instead chooses to step back and allow these real people and their stories to shine.

Because, in Nomadland, every soul matters.

While acknowledging the struggles such as maintaining work and food, the most beautiful aspect of the film is the way that it celebrates those that have found sanctuary and salvation in a nomadic lifestyle. While many have bound their lives to mortgages and static jobs, Nomadland shows the refreshment of the soul that can take place when one untethers themselves from these sorts of demands. For example, as Fern ventures into the American West, she does so not to conquer new worlds but to reconnect with the deepest core of her identity. With the death of her husband and loss of her job, Fern’s old life suddenly feels motionless. Though she may have been left adrift, her heart now yearns for movement and independence.

However, Nomadland understands the old adage that ‘not all that wander are lost’.

As she builds new relationships amongst those whom she meets, Fern is struck by the deep sense of community that exists within the nomadic culture. Embedded with a profound sense of supporting one another, those that Fern encounter along her journey share a sense of camaraderie and love that is utterly remarkable. Characters such as Swankie and David provide relationship lifelines that feed Fern’s soul and show her the meaning of love yet they never ‘tie her down’.  Though they may not be present with each other for long, their desire for freedom creates a loving connection that endures and uplifts. As a result, though she may not have a house to call her own, Fern absolutely believes that she has found a home amongst her newfound family.

Featuring what may be the most honest and open performance of McDormand’s career and some absolutely magnificent storytelling, it should come as no surprise if you hear Nomadland’s name called out when Oscar night (finally) arrives. In short, this is a very special film. Coming at a time when we all exist in isolation, Zhao highlights the importance of connecting with one another, especially when we find ourselves so alone.

Nomadland is now available on Hulu in the US and will be available in Canadian theatres on March 19th.

In Louder than Bombs, when noted war photographer Isabelle Reed (Isabelle Huppert) dies on the eve of an exhibition honoring her work, her husband Gene (Gabriel Byrne) and two sons, Jonah and Conrad (Jesse Eisenberg and Devin Druid), must deal with their grief. Each has a different approach to the difficult time. Each must come to terms with the way their relationship with her evolved. 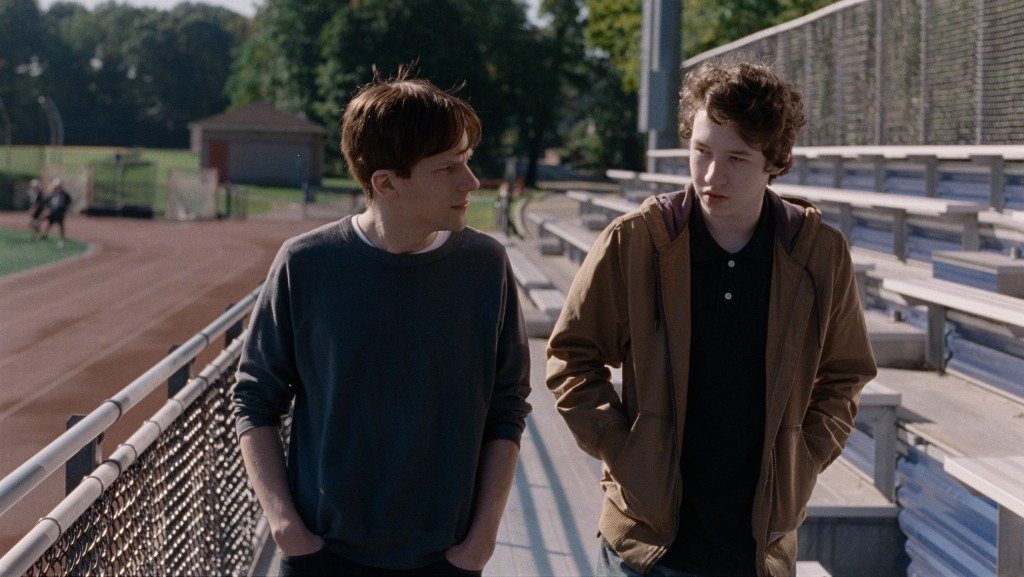 For Gene, it is a time of struggling to connect with Conrad, who has taken refuge in video games. Jonah, a new father, takes leave from his career and new family to catalogue his mother’s photos. There are many ways that these characters are all hiding from the grief that they must deal with—and also from the fears of what life may become for them. Their memories are sometimes painful and at other times joyous. They will discover secrets about one another and about their mother. Eventually they must choose on how they will deal with their grief and how to move from this time of death and darkness to a way back to life.

One of the issues that all must deal with is that Isabelle was somewhat detached from them all. She would be gone for long periods to war zones, where she would be in danger, leaving her family behind to worry. Even when we see her pictures of women in those war zones, the faces seem blank, as if reflecting Isabelle. We can’t tell if faces reflect boredom, anger, or oppression. It is that same kind of detachment that seems to be growing within Jonah. With a newborn baby at home, he spends his time at his father’s house dealing with the massive number of his mother’s pictures. He seems to be avoiding his own role as husband and father, just as his mother may have been avoiding her role with the family.

Grief is one of the universal themes that film can address. As we watch the Reed family deal with the grief in their life, we feel a connection with them because we have been there as well. Even in relationships that may not have been all we might wish they had been, the loss of one who holds an important place in our lives is a struggle that is so difficult that many may look for ways to avoid it. But in time, it must be faced.

Photos courtesy of The Orchard.