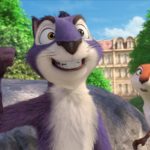 From the Canadian writer/director team of Cal Brunker and Bob Barlen (Escape from Planet Earth, upcoming Son of Bigfoot), The Nut Job 2 is the clever sequel to the 2014 animated film starring Will Arnett that wasn’t The Lego Movie … but was just as funny. Starring as Surly, Arnett’s voice drove the story of a group of animals from Liberty Park… [Read More]