Akilla’s Escape follows one night in the life of Akilla Brown (Saul Williams), a 40-year old drug trader who has decided that it’s time to get out of the game. Out on a routine hand-off, he is suddenly caught in the middle of a violent robbery. When he discovers that one of his attackers is , a fifteen-year-old Jamaican boy named Sheppard (Thamela Mpumlwana), he realizes that the young man is a member of the same criminal organization that he fell into himself as a child. As he attempts to help the him, Akilla must also confront his own upbringing as a youth (Mpumlwana again) in order to chart a new path for them both.

Written and directed by Charles Officer, Escape is a haunting experience that sits with you long after the film is over. Featuring bleeding colours and pulsating soundtrack, Escape visually creates two worlds and then blurs one into the next, highlighting the challenges of ever truly escaping the darkness entirely. Star Saul Williams—who also collaborated on the soundtrack with Massive Attack’s 3D—absolutely smolders onscreen as the elder Akilla, imbuing his character with confidence and humility. Not to be outdone, Mpumlwana is absolutely stunning as both the terrified Sheppard and the increasingly rage-fueled young Akilla. As a result of the film’s stellar cast and solid visuals, Akilla’s Escape is a gritty and visceral piece that serves as a tragic reminder of how difficult it can be to break free from our past yet Akilla’s journey also carries within it an admirable strength of character that feels hopeful.

This is more than a film about gang life.

This is a film with soul.

As he grapples with his own inner demons, Akilla’s journey is an example of what happens when our past collides with our present. Attempting to break the cyclical nature of violence and poverty, Akilla lives in a world that refuses to give him up. Ready to sell his profitable marijuana business, he believes the time is right to walk away, even if his business partners disagree. When he encounters Sheppard, Akilla’s personal journey feels as though it has come full circle. His desire to rescue the young man serves as both potential freedom for a youth heading down a dark path and redemption for his own lost childhood. (It’s worth noting here that Officer’s decision to cast the young Mpumlwana in both roles further highlights the fact that the elder Akilla sees himself in the young man.)

In many ways, Akilla’s father, Clinton (Ronnie Rowe), may be the subtle central figure of the film. Broken by his own childhood of violence, Clinton is abusive and filled with rage, passing on terrifying words of ‘wisdom’ to his young son. (“War is a matter of vital importance for the province of life,” he warns a wide-eyed Akilla.) Now grown himself, Akilla finds the words of his father ring in his ears, even as he kicks against them. Whereas Clinton pushed him towards violence, Akilla understands that hope lies beyond the barrel of a gun. For Akilla, his experience with Sheppard creates an opportunity to break the cycle and help someone take a new path, even as he carries his own scars with him.

As the credits roll, there is an intrinsic sadness within Akilla’s Escape that lingers. Though the film offers hope to its characters, this is a piece that shows the tragedy of generational pain and its affect on the future. As such, though Akilla’s past may be something he wishes he could forget, this is definitely a story worth remembering.

Akilla’s Escape is currently streaming on the TIFF Bell Digital Theatre as part of the Planet Africa series during the Toronto International Film Festival.

The Jungle Book is Disney’s new high-tech, live-action (sort of) remake of their 1967 animated film based on Rudyard Kipling’s 1894 book. The new version tries to find a middle path between the more light-hearted earlier film, and the darker, more mythic Kipling story. Director Jon Favreau purposely wanted to keep some of the elements of the earlier film that he loved as a child. But rather than produce a straight remake, he has created something much more enticing with much greater depth.

Because the film is mostly CG animation (assisted at various points of production with puppetry and motion capture), it has an amazingly realistic look to it. These are not cartoon tigers, wolves, and bears. They look real, even though they talk. That in itself makes the film a bit darker and scarier (especially for younger children). The action/adventure element can be intense at times, but that just adds to the enjoyment of the film. 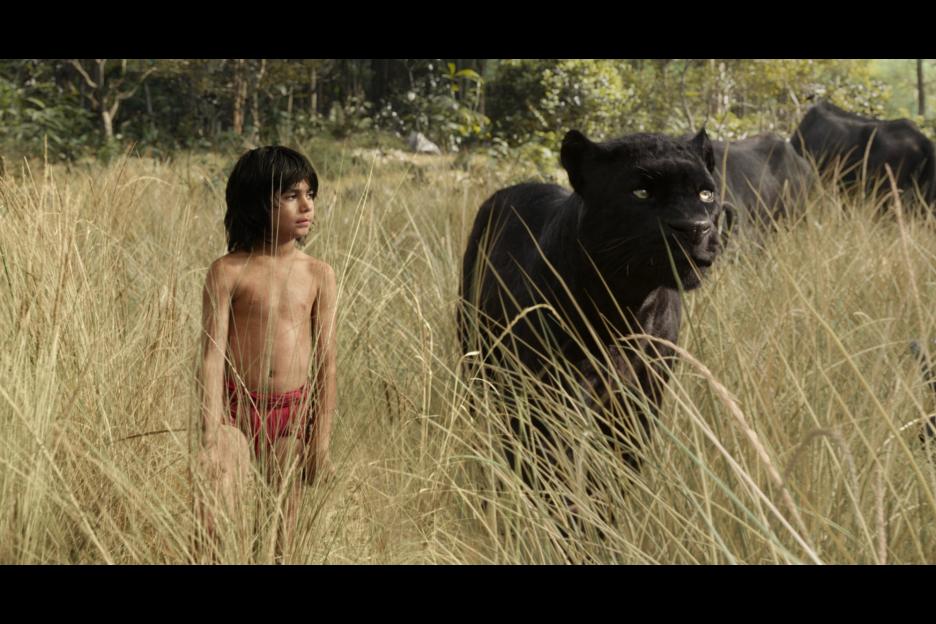 The film is part coming of age story and part hero’s journey. This is the story of Mowgli (Neel Sethi, the only actual onscreen performer), a man-cub discovered alone in the jungle as an infant by the panther Bagheera (voiced by Ben Kingsley). Knowing that Mowgli would need “a people” to raise him, he was left with the wolf pack lead by Akela and Raksha (Giancarlo Esposito and Lupita Nyong’o). This is the only home and family that Mowgli has known. When the tiger Shere Khan (Idris Elba) discovers there is a man-cub in the jungle, he vows to kill it and anyone who stands in his way.

It is decided that Mowgli must leave the jungle for the realm of men. He and Bagheera start off on a journey to the human village. Along the way there are adventures—some fun, others quite dangerous—in which Mowgli must learn to make wise choices. He also must use his resourcefulness (a part of his human nature) as he makes his way. Among those he meets on the way are Kaa (Scarlett Johansson) a massive and seductive python, Baloo (Bill Murray) a slothful but lovable bear, and King Louie (Christopher Walken), a huge Gigantopithicus (a cross between an orangutan and a yeti) who wants Mowgli to give him the secret of man’s red flower (fire) so he can rule the jungle. 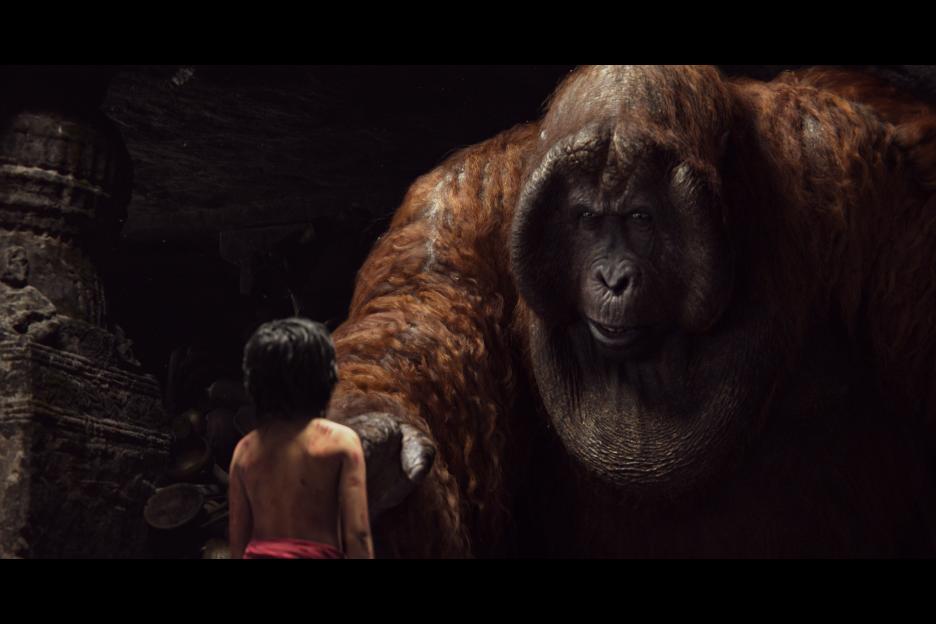 There are several themes in the story worth exploring. The first is what it means to be human and what it means that humans are animals. Mowgli, having been raised by the jungle animals, really thinks like them. He has had no contact with humans so he doesn’t know what they are like. Yet, he is also different from the animals. He has “tricks”. He creates and uses tools. He makes complicated plans to achieve an end. But Mowgli, even though he has certain skills as a part of his nature, is never seen as above the other animals. He feels he belongs to the jungle, and most of the animals accept him as he is.

Mowgli also must choose between two approaches to life. Bagheera, his primary mentor, and the wolf pack live by order and rules. The pack regularly recites the Law of the Jungle (taken from a Kipling poem). Bagheera (as played by Kingsley) has a military swagger. But when Mowgli meets Baloo, he is exposed to a much different understanding. Baloo lives for ease and pleasure. At first look, this may come across as the kind of difference between wisdom and folly found in the biblical book of Proverbs. But Mowgli learns that each way of living has its own rewards. It is not so much that he must choose between them as he must learn to balance them. Bagheera and Baloo also learn of the need to balance. 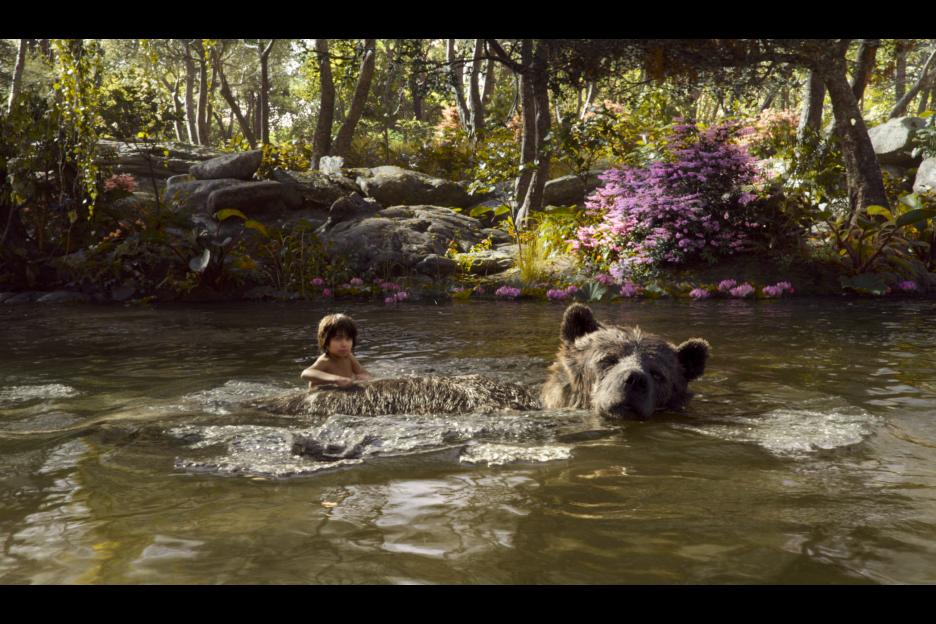 But the key value that The Jungle Book puts forward is that of community. Mowgli alone may be resourceful and creative, but he is no match for the dangers in the jungle. That is why Bagheera gave him to the wolf pack to raise. Much of the film is built around the idea of community: Mowgli and the Pack, Mowgli and Bagheera’s relationship, and Mowgli’s working and playing with Baloo are all about the importance of being tied to one another. And when Mowgli and Shere Kahn must settle scores, as we know they must, it is the Law of the Jungle—“For the strength of the Pack is the Wolf, and the strength of the Wolf is the Pack”—that sets the stage for the outcome. In Ecclesiastes it says,

“Two are better than one, because they have a good reward for their toil. For if they fall, one will lift up the other; but woe to one who is alone and falls and does not have another to help. Again, if two lie together, they keep warm; but how can one keep warm alone? And though one might prevail against another, two will withstand one. A threefold cord is not quickly broken.”

The importance of helping each other and living in peace with others is at the core of The Jungle Book.