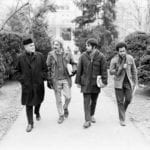 He was called “the Conscience of the Nation.” He was the advisor and friend of Presidents of both parties from Dwight Eisenhower to Ronald Reagan. He served (and eventually chaired) the U.S. Civil Rights Commission. And around the Notre Dame campus (where he was President for 35 years) he was Father Ted. Father Theodore Hesburgh… [Read More]