Set in the heart of WWII, Midway tells the dramatic story of the US soldiers and pilots who fought during the Battle of Midway in June 1942. Having remained ‘officially’ neutral in the war, the US found themselves drawn into the conflict after the bombing of Pearl Harbour in December 1941 at the hands of the Japanese. Over the next few months, they engaged in a military chess match as both superpowers attempted to outmaneuver one another, culminating in the epic Battle of Midway.

Directed by Roland Emmerich (The Patriot), Midway is a bold and sweeping film that attempts to walk the line between historical drama and action blockbuster. Known for such epic films as Independence Day and The Day After Tomorrow, Emmerich understands the nature of spectacle, which he puts to good use onscreen here. With every screaming bullet and fiery explosion, Emmerich seats the viewer in the centre of one of WWII’s most iconic battles. As a result, the sweeping nature of the action and its ‘rag-tag’ group of characters who come together to win the day fits well into Emmerich’s repertoire. (Ironically, however, it’s interesting to note that the historical aspect of this particular film makes Midwaysomewhat of a departure for him as well, given that his filmography consists almost entirely of science fiction epics.)

Unfortunately, where Midway loses its way is in the area of character development. Like many of Emmerich’s other films, Midway’s heavy reliance on stunning battle sequences often leaves its characters somewhat one dimensional in the middle of complex circumstances. As a result of the film’s emphasis on action, heroic historical characters like Lieutenant Commander McClusky (Luke Evans), cocky war hero Dick Best (Ed Skrein), and Admiral Chester Nimitz (Woody Harrelson) aren’t given the time to explore their true feelings and motivations in the midst of the most difficult of times. None of this is particularly surprising, given Emmerich’s back catalogue. After all, for Emmerich, the greatest drama lies in the victories and losses as opposed to the inner battles of his characters. However, it does keep Midway from truly landing as a truly compelling historical drama. (Although, it is worth noting that one of the most surprising aspects of the cast is its lack of ethnic and gender diversity. While the film is set in the 1940s and the film’s heroes were actually Caucasian males, the script gives little opportunity to anyone else to speak their voice, an important aspect that is usually a staple of Emmerich films.)

However, the film’s penchant for spectacle does powerfully emphasize the nature of sacrifice. For Emmerich, the greatest demonstration of valor comes when people are willing to give their lives in the service and protection of others and Midway demonstrates this truth well. For these characters, war is neither driven by a quest for glory nor individual medals but by doing what is required in order to keep their families safe. In some ways, Midway exemplifies the power of sacrifice best in its smaller moments. For example, one brief scene where a young girl is rescued by her mother as Pearl Harbour is destroyed speaks to the more personal implications of war. In another, as Best informs his troops that, ‘even though they’ve been through hell, they have to get back out there’, the audience recognizes the sheer exhaustion that is required of military troops when they are thrown into the field. Brief moments such as these speak to the true sacrifice of life at war when families are directly impacted or men and women are called upon to give more than they have to offer in service to a call greater than themselves. In this regard, Midway wears its heart on its sleeve by demonstrating Emmerich’s admiration for those who have committed their lives to the mission.

Even so, as the end credits roll, Midway leaves the audience with somewhat of a mixed bag of emotions. While the film’s spectacle is thrilling and often gorgeous to see, frequently one-dimensional writing for its characters and a surprising lack of diversity hold the film back from true greatness. While it’s easily Emmerich’s most entertaining film in years, Midwayis still missing enough depth to truly land the plane.

Midway brings history to life in theatres on Friday, May 8th, 2019. 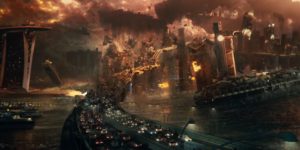 This week on the show, Chris Utley joins Steve to discuss INDEPENDENCE DAY: RESURGENCE, the sequel to the 1996 classic alien film. Plus, the guys talk about the least and most successful reboots/sequels.