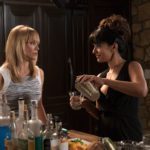 If Best Fake Friends were set in middle school, it would be called a coming of age comedy that points out the dangers of falling in with the wrong crowd. But being set among adult women it loses much of the comedic aspect and becomes a story of a desperate attempt at finding validation in the eyes of others.