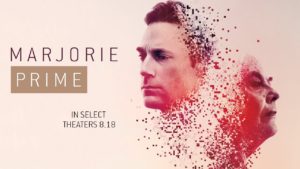 Think of an important event in your life. Do you remember it the same as someone else who was there? Do you remember it the same as you did a few years ago? Marjorie Prime is about the relationship between reality and memory. Based on a Pulitzer-nominated play, the film is a cerebrally challenging encounter between the past and what it means to us.

Marjorie (Lois Smith) is a woman in her 80s whose memories are quickly fading. We see her talking to a much younger man, Walter (Jon Hamm). But this is set in the near future and Walter is an artificial intelligence hologram of her late husband. He has been programmed to tell her the story of her life. Of course, his understanding is only as accurate as the memories that have been fed into his program. In the interaction between Marjorie and Walter, he is able to adjust his memory to accommodate new facts or perspectives. Perhaps he can even change the story to make it better. Marjorie’s daughter Tess (Geena Davis) finds it a bit creepy that the hologram represents her father as a young man. Her husband Jon (Tim Robbins) believes this is a chance to help Marjorie remember and to continue to have a bit of joy in her final years. In time, both Tess and Jon find new ways of using the technology in their own lives. 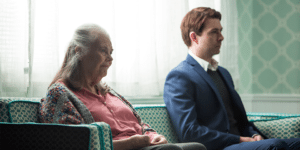 The stage play character of the film make this really about the conversations between the various characters. Some of those are about past memories, but some are also about the nature of memory itself. At one point it is mentioned that when we remember something, we are really remembering our last remembrance of it. Each time we may remember it slightly differently, so the cumulative effect of repeated remembrances could actually be much different from the reality. But if that is so, which is more important, the actual event or the evolved memory that we hold? This is especially relevant when our memories are sometimes unpleasant. Do we really want to remember them? Do we never want to forget them?

As I said, this is an intellectually challenging film. (To me, that is a good thing.) When my wife and I saw this with a friend, it led to quite a bit of discussion after the film. This kind of slightly esoteric questioning may not appeal to some. But for those who want to be jarred into thinking about the things you remember (or think you remember), Marjorie Prime will be well worth the time. It’s one of the best films I’ve seen this year. 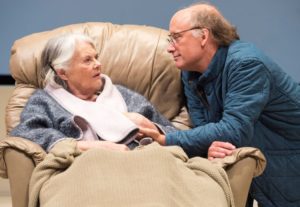