Does the chance to make big money while enjoying the outdoors appeal to you? That’s the come-on in the sci-fi-ish look at the gig economy in Lapsis, directed by Noah Hutton. The film has been nominated for a Film Independent Spirit Award for Best First Screenplay.

Ray (Dean Imperial) is having a hard time making ends meet and care for his sick brother Jamie (Babe Howard) who suffers from Omnia, a new disease akin to Chronic Fatigue Syndrome. In order to pay for treatment at a well-known (but perhaps not quite up-and-up) clinic, Ray arranges to get a medallion allowing him to “cable”. In this somewhat alternate present, quantum computing is growing rapidly and requires a network to be built by people running cable overland between large magnetic transistors that have been placed in various state and national parks. There are loads of people dragging cart with spools of cable, each on their own route between two transistors. There are also cute little robotic carts pulling cable.

Each cabler has a unique handle. When Ray first checks in for training, he learns his handle is Lapsis Beefteck. He thinks nothing of it until when he gets to a campground, he discovers he has a large number of credits on his medallion already. It is even more suspicious when others ask his handle, only to be greeted with anger when he tells them.

We soon learn that this job, while it can be lucrative, is also exploitive to the workers. Those cute little robots have the ability to steal your route and if you don’t outrun them, you won’t get paid for your work.

In time, Ray runs across Anna (Madeline Wise), a fellow cabler who treats him kindly. In time she tells him the truth about the name he’s going by, and the possibility of how that can help all the cablers break free of the corporate exploitation.

The film reflects a reality built into the gig economy. While it may seem like a great way to make money, there are often various ways that the corporations in charge are taking advantage of workers with no protection under labor laws. And this is not just about the gig economy, but often very large companies offer very little to those who actually do the work, while the owners reap huge profits and stifle any attempt by workers to gain rights.

While the film has a social message it wants to bring to the fore, the story feels not quite finished. The discovery of the real Lapsis Beefteck, his role in the exploitation, and his surreptitious role is ending it could use a bit more fleshing out to bring the story to a more understandable conclusion.

Lapsis is available on virtual cinema through local theaters and on VOD.

What happens when all you’ve ever dreamed of is taken away? That is a question that many films ask, but few answer it as beautifully and spiritually as Chloé Zhao’s The Rider. This is a partially fictionalized story set on the Pine Ridge Reservation. It blends fiction and non-fiction seamlessly to subtly blend hope and despair, beauty and starkness, suffering and healing.

Lakota cowboy Brady Blackburn (Brady Jandreau) is recovering from a near fatal rodeo accident. With a metal plate in his head, doctors have told him that he can’t ride anymore. But riding and training horses are all he’s ever cared about. The film begins following Brady with staples still in his scalp. As he heals, he longs to get back in the saddle, but for him it could be deadly. The film watches as he breaks a wild horse, first by talking, touching, and in time riding. Brady has a gift for calming a horse and gaining its trust. 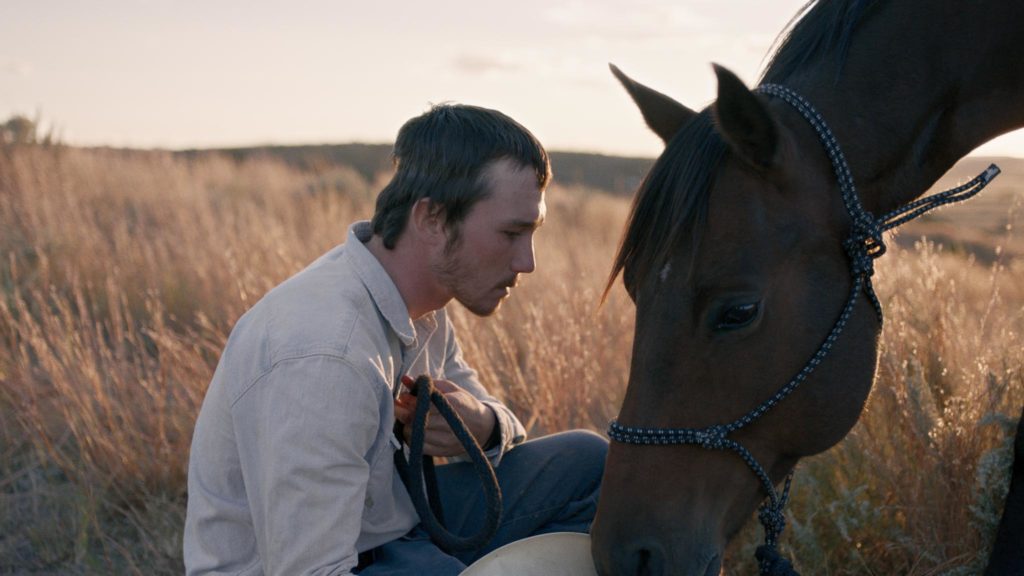 With his friends Brady tries to keep up the hope that he’ll ride again, and they encourage him. Brady also visits Lane Scott, a rodeo rider, who was injured in an auto accident and can only communicate with one hand. With Lane, Brady speaks and touches in ways very much like he does with horses. He exudes gentleness and compassion.

One of the things I noticed in the film is that nearly everyone is injured and in need of healing in some way. Brady’s sister Lilly (Lilly Jandreau) has Asperger’s syndrome. There is a man with a hook of a hand. Brady’s horse Gus has a nose worn raw from rubbing a fence. But sometimes, things cannot be healed. His other horse Apollo is injured beyond help. It leads Brady to wonder why he rates being kept alive more than a horse does.

Although the film only occasionally is overtly religious (the film does have some excellent authentic prayers), its spiritual power is much more subtle. Healing in this film is rarely about the physical. It is the healing of souls that the characters engender in one another. Brady and Lilly both have severe handicaps, but their love for each other and their commitment to care for one another gives them strength and hope. Lane is completely wheelchair bound, but Brady sets things up so he can relive the experience of riding once again in a scene that may seem heartbreaking at one level, but at the same time, it is a powerful example of giving a friend a gift of regeneration—at least regeneration of the soul.

The Rider is the kind of film that may exhaust you from the depth that is hidden within its simplicity. But from that exhaustion one will come away with a renewed belief in the perseverance of the human spirit.

“I wish I could live through something.”

The senior year of high school, the cusp of adulthood, is the setting for Lady Bird, the coming-of-age comic drama from writer/director Greta Gerwig. Christine “Lady Bird” McPherson (Saoirse Rowan) is at that point where she is not satisfied with her life. Her hometown of Sacramento seems to be the epitome of nowhere. Her family, which is struggling financially, is somewhat embarrassing to her. Even her image of herself isn’t what she wants it to be, and so she has chosen her own name. 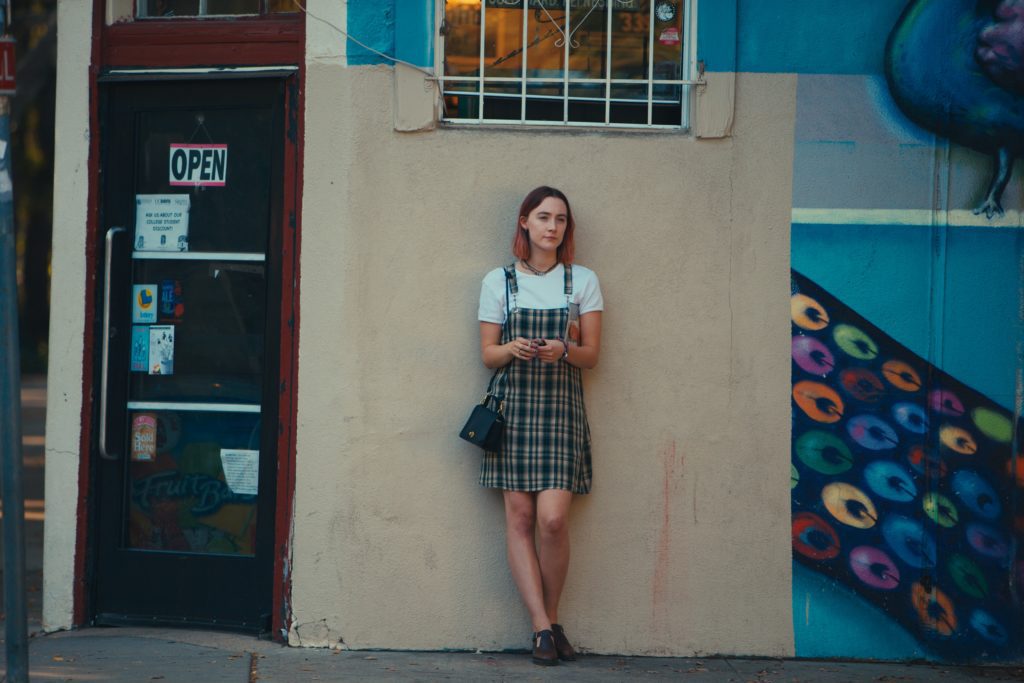 Lady Bird’s senior year (2002-3) is almost a holding pattern for her desire to leave and live the kind of life she believes exists in other places. She wants to go to New York for college, even though her grades are mediocre and her family can’t afford much. Along the way there is experimentation with acting, boyfriends. There is typical teenage heartbreak. But mostly there is conflict with her mother, Marion (Laurie Metcalf).

Marion is very pragmatic. She hunts for bargains. She works two shifts. She tries to push Lady Bird out of her own self-absorption. There are times she and Lady Bird bond as mothers and daughters often do, but they also irritate and repel each other as mothers and daughters often do. Marion often seems hard or angry, but she is always loving. Lady Bird only senses the animosity, leading her at one point to say “I wish that you liked me.” But she fails to see just how much Marion and Lady Bird’s father (Tracy Letts) do for her. Lady Bird is often cruel in her relationship with her mother. Never in big ways, but she tends to wound with a thousand small cuts. 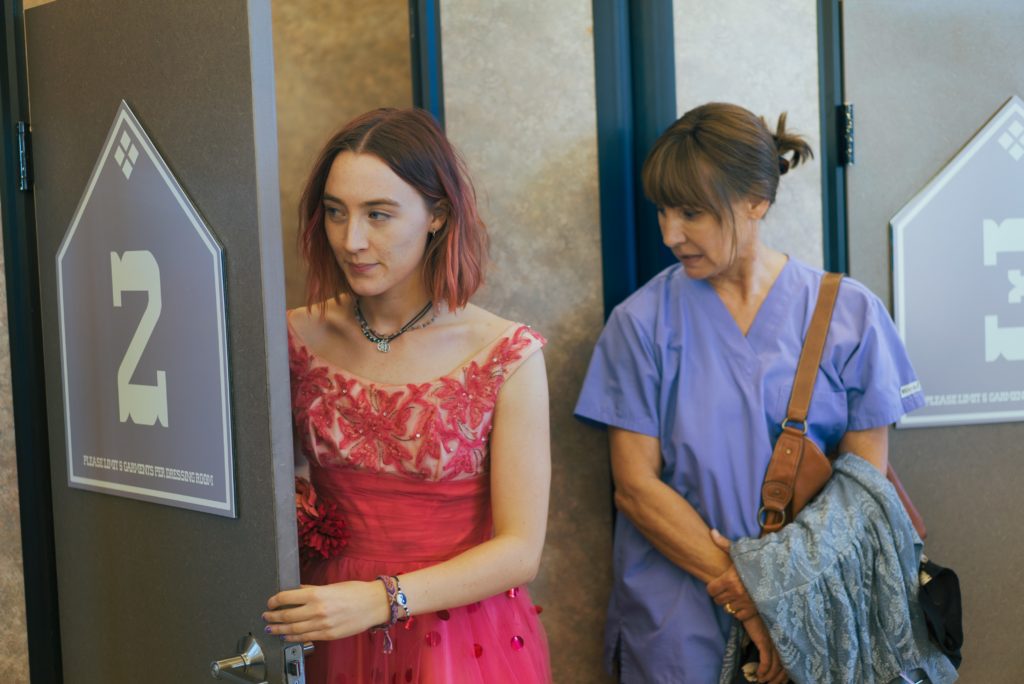 There is a great sense of reality to this relationship, in not small part because of the reality of the characters. Ronan’s portrayal of Lady Bird is not about a great teenage angst, just the day-to-day struggle to understand who she is and wants to be. Metcalf’s Marion is not a saccharine best friend or a dominating harridan. She is struggling with her own understandings of Lady Bird and her desires for Lady Bird’s future.

There is also a spiritual dimension to Lady Bird’s story. Because she attends a Catholic high school (although apparently not Catholic herself), there are scenes that take place in religious services, and priests and nuns play roles in her life and growth. The religious aspect is always treated with respect. The religious characters are just as human as everyone else in the story. The most prominent is Sister Sarah Joan (Lois Smith), the school’s principal who provides a touch of grace in nearly every scene she is in.  And although Lady Bird may not seem to be outwardly religious, the environment that the church has provided through her time at school, provides her with a place to re-center herself when she discovers life away from home is not as different as she had hoped. 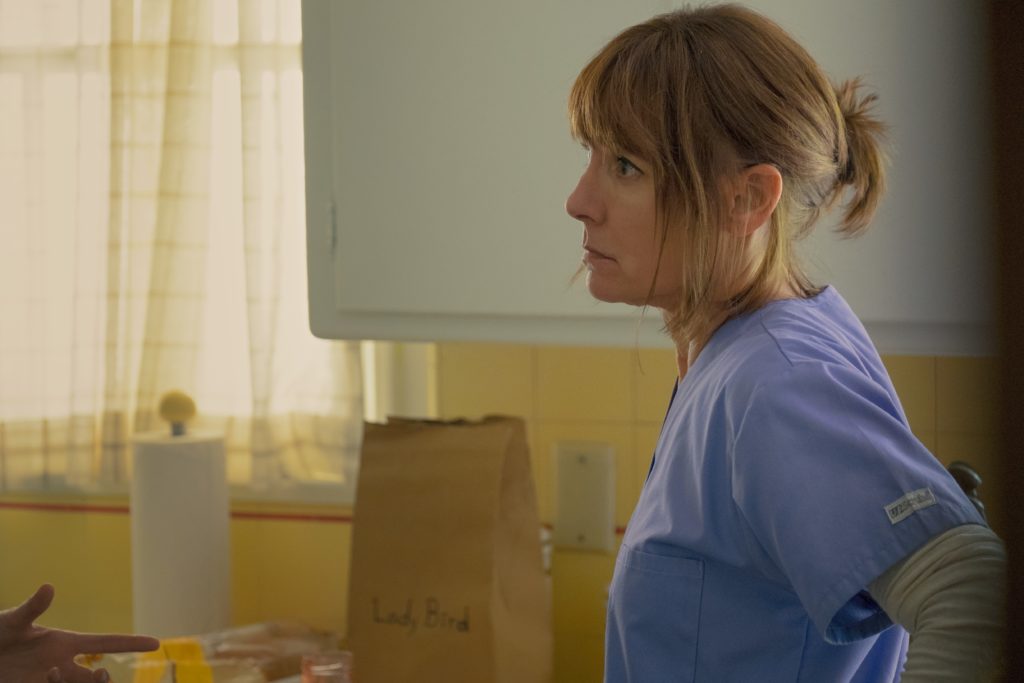 This is one of those films that has me wanting to go back to Ecclesiastes. Certainly Lady Bird thinks “There is nothing new under the Sun” (at least in Sacramento). She is busy looking for meaning and happiness in wealth, or sex, or fame, as did Qoheleth. And like Ecclesiastes the discoveries of meaning are found within.

I saw this film on Thanksgiving weekend, and it was amazingly appropriate. So much of our time is spent being oblivious to the many things we have because we so often focus on the things we do not have. That is very much Lady Bird’s experience with the world. Sacrament seems to her to be a place to escape from, even though when she wrote an essay about it, Sister Sarah Joan says it shows she loves this place. She sees her family as an embarrassment, but also a place of love. She thinks she has never really experienced any thing of import, but each little thing adds up to a life time. Which brings us to the quote I use to open this review. It is one of the first lines in the film. By the end, we know (and Lady Bird is discovering) that she has been living through a great deal. That is an important first step in appreciating the world and the people around us.

Photos courtesy of A24.