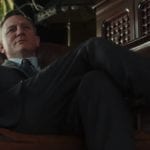 In KNIVES OUT, Rian Johnson draws the viewer into a world of diabolical murder and twisted intrigue. When aging mystery novelist Harland Thrombey kills himself after his 85th birthday, the police initially rule his death a suicide. However, after private investigator Benoit Blanc is brought in to question the cantankerous clan, he suspects that Thrombey’s… [Read More]