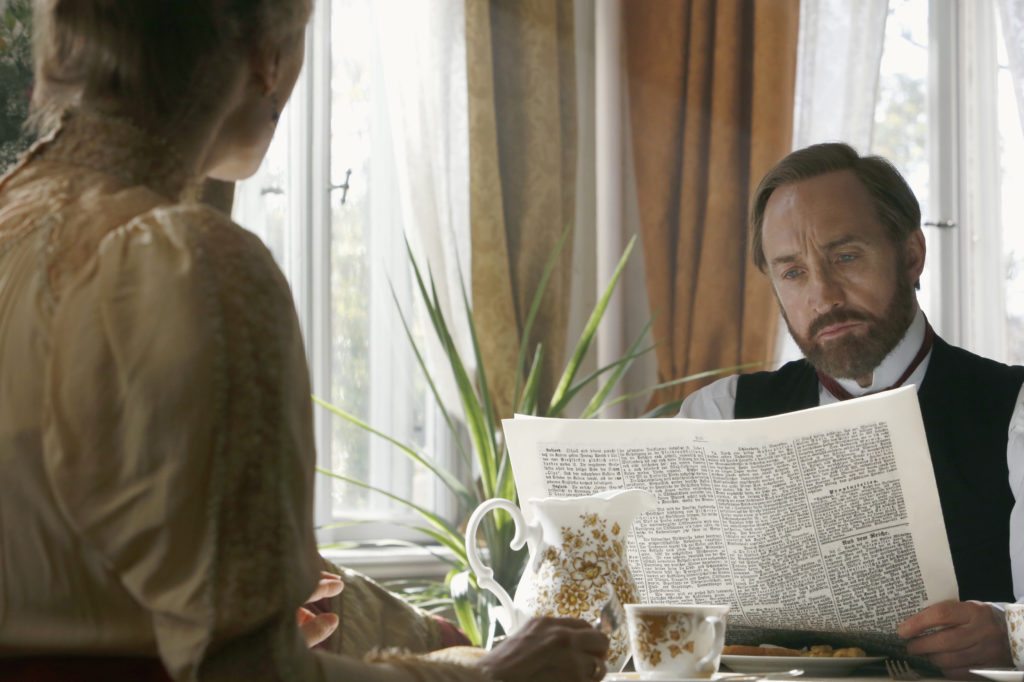 When we last left Genius (Tuesdays, 9 PM/8 CT, NatGeo), the individual having the worst of times was Mileva Maric, Albert Einstein’s romantic interest. Mileva (Samantha Colley) had left school in Zurich due to him, gotten back together with him, and suddenly found herself back in her home country of Serbia because of him.  To make things worse, she was also pregnant.  The third episode picks up the obvious tension and carries it in both predictable and unpredictable directions.

The episode begins with a scene involving Philipp Lenard (Michael McElhatton), the professor in the first episode who made an impassioned speech about German unity to his students (seen above).  At the beginning of the century, Lenard discovers the basis for the x-ray, then watches as Wilhelm Röntgen steals the discovery for his own, forcing Lenard to attempt to validate himself in the eyes of the scientific world when the first Nobel Prize is offered.  Needless to say, it doesn’t go well.  This may play a role in subsequent episodes . . .

Mileva struggles with knowing what to do, asking her father to give Albert a chance.  Einstein (Johnny Flynn) isn’t around but is trying to make a name for himself in Zurich.  But he can’t get a job and is unwilling to simply take what’s out there (even a job at a patent office) to get some funds.  Desperate for money, he begs from his mom, but there’s nothing left.  He worries that Mileva and the soon-to-be-born child will be an albatross that weighs his professional life down; she feels similarly about him. 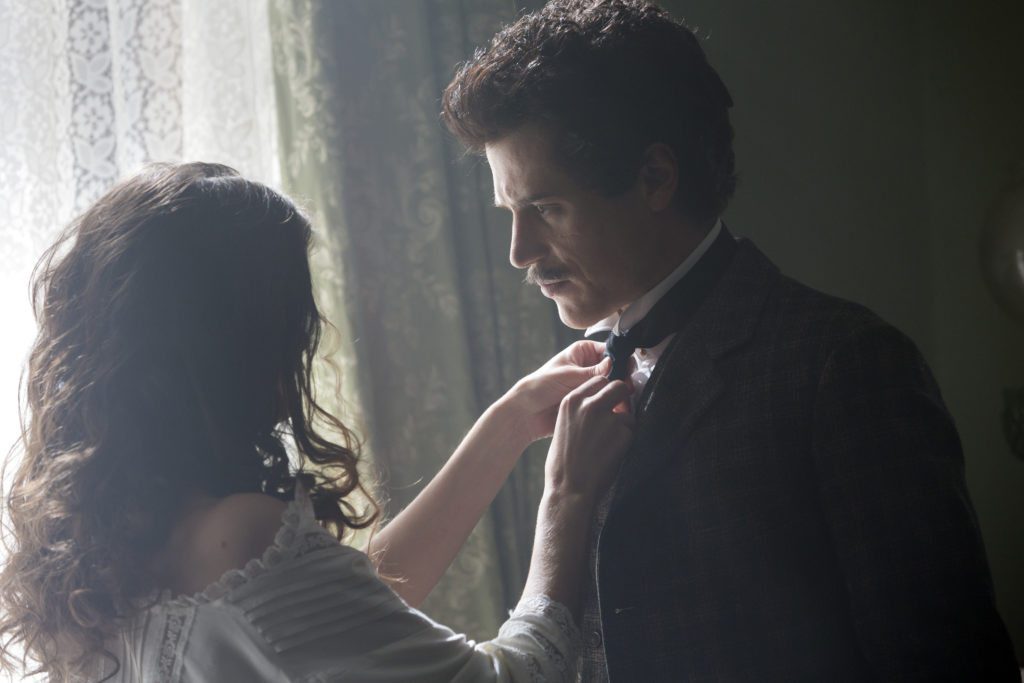 The two carry on an academic-based relationship, but Mileva wants Albert to care about her as a person instead of just a brain. He struggles with this—and the struggle is exacerbated when he meets a young gentleman with an interest in philosophy and science.  The guy (and his brother) are rich, and the three form a sort of triumvirate called the Olympia Academy.  It is at this point that Einstein is torn three ways—one for the Academy in Zurich, one for his estranged father who is dying in Milan, and one for Mileva who has just had their child in Serbia.  What direction will he choose?  What will be the ramifications of his decision? You’ll have to watch to find out.

Director Minkie Spiro continues to do a great job setting up the characters and weaving their lives into the overall fabric of the story.  The viewer knows where the story will eventually go, but the side stories subtly add tension and background.  Einstein, for all of his smarts, comes off as an academic jerk who cares only for himself.  His mind is in the clouds, wanting only a teaching job—to the detriment and befuddlement of those around him.  Mileva is obviously the sympathetic character, and by the end of the episode, you want to stand beside her, wrap her in a hug, and cry with her.

Einstein is faced with his character issues early on when he asks for a reference from the headmaster at Zurich, Heinrich Weber (Alistair Petrie).  Weber alerts him that his academics are superb, but he couldn’t provide him a favorable recommendation due to issues with his character—namely insolence.  Instead of accepting it and attempting to get better, Einstein fights Weber and attempts to get him to change his mind.  You can guess how that turned out.  God wants people who follow Jesus to be people of character that exude the “fragrance of Christ” to everyone they meet (see 2 Corinthians 2:15).  It’s difficult to do that when one’s lifestyle includes such things as lying, cheating, stealing, or a host of other offenses. However, God’s goal is to help people become more like him in their thoughts, feelings, and actions.  He will use numerous ways to get our attention—perhaps even in a direct manner such as the one Einstein faced.  It’s up to us to listen, respond, and make the changes he asks.  The end result is an individual who knows what to do for God in all situations and makes a positive difference for others they come across.