You are here: Home / Editorial / The Last Jedi: Change and Timing

It’s been a full week since I sat in a packed theater and took in the spectacle that is the eighth episode of Star Wars.  Since then, the reaction to Rian Johnson’s vision has produced levels of venom, vitriol, and vituperation that I didn’t know existed in filmgoers (a change.org petition currently exists to have it removed from the canon and has more than 13,000 signatures–seriously).  Then again, numerous people have praised it as a worthy addition to the SW canon.

After reviewing films for over a decade, I’ve learned not to jump to conclusions about a film immediately upon viewing it. It takes me a day or two to really think through and process the action, dialogue, and themes that a movie offers to the viewer.  In the case of The Last Jedi, there’s a massive amount of dissection people will inevitably perform in the next two years, so I’m not going to take my scalpel and add too much more to the growing body of speculation.  However, I think we need to take a closer look at the film’s components and see what they add up to.

It is important to note that The Last Jedi is not worthy of a Best Picture nomination at next year’s Academy Awards.  The dialogue is too wooden in places, some of the acting is a bit wonky, and the running time is about 15-20 minutes too long.  With that said, it’s still a great film and provides the next generation an opportunity to join into the phenomenon that is now going on for nearly 40 years.

The Last Jedi is nearly impossible to discuss without spoiling key plot points, so here is your friendly warning that spoilers will be part of this article going forward.  If you haven’t seen the film, go see it and then finish reading this article with a clear conscience.

The biggest issue for most fans has been dealing with change.  It’s been a while since Luke Skywalker (Mark Hamill) was introduced to the world, staring at a binary sunset.  You would think people want him to stay hermetically sealed, never to age or decay.  Sorry, but life happens—even for Jedi masters. They get older.  Situations leave an indelible impact on their conscience. Their personalities change.  Even they need reminders from time to time about what their purpose needs to be (thank you, Yoda).  Yes, Luke is a different person than he was in Return of the Jedi. But he’s become older, grizzled, and prone to some of the same faults that he exhibited in the cave on Dagobah.  He’d rather stay a hermit on Atch-To, protected from change, than deal with the world for another second.

Rey (Daisy Ridley) wants to bring Luke back into the real world to help out in a desperate time for the Rebellion. Yet he resists because he doesn’t want to endure change. In the end, he does help, but on his own terms while performing one of the all-time great gotcha scenes with Kylo Ren (Adam Driver). It’s a fitting way to end his human legacy, but I have a feeling he’s going to be a thorn in Kylo’s side for a majority of the final film in the series.  It’s kind of like Christians who want to sit on the faith they profess, never revealing it to the people they come across on a daily basis. If there’s a light available, as Jesus stated, hiding it under a basket serves no benefit to anyone (see Matthew 5:14-16).  At least Luke made himself known in a manner that served to encourage and stiffen the spines of the remaining Resistance fighters.  They’ll need all the help they can get going forward! 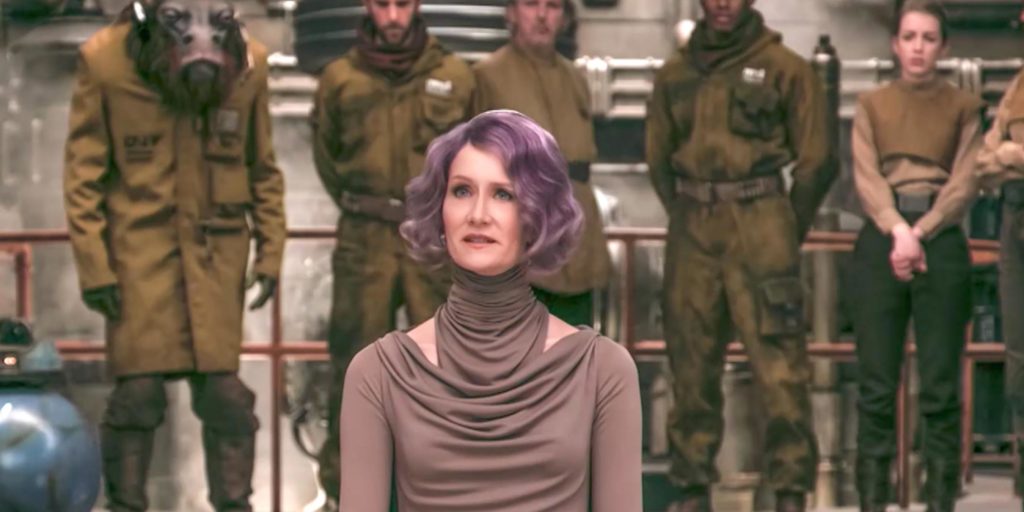 A second issue people are having with the film involves Admiral Holdo (Laura Dern) and her seemingly indecisive nature.  After Admiral Ackbar is picked off (no biggie for me—he only had one major line in the series that has already been memed to death), Princess Leia (Carrie Fisher) appoints her as the replacement. Her focus is simply to stay the course regardless of the obstacles around her.  Poe Dameron (Oscar Isaac), impulsive fighter pilot, can’t handle Holdo’s leadership style and attempts to take matters into his own hands, placing the existence of the Rebellion in jeopardy.

Perhaps the most powerful scene in The Last Jedi occurs when the Resistance members flee to the base on Crait and are picked off, one ship at a time, by the First Order.  Holdo stays on the main ship by herself, seemingly unwilling to take on the enemy combatants.  Then, in what will forever known in my book as the Holdo Manuever, she spins the ship around and, with the last ounce of fuel, makes the jump to hyperspace through the First Order battleship.  It sucked the air out of the theater I was in, and for good reason.  It was unexpected, it was brazen, and it was effective enough to get the remaining Resistance members to safety.

God works in this way in our lives.  We have big, beautiful plans for our one opportunity on earth, and we don’t want them to get derailed by anything.  Sometimes we want to rush things and end up looking silly, potentially hurting others along the way (in addition to ourselves).  But God says very clearly to Isaiah, “’My thoughts are nothing like your thoughts,’ says the Lord. ‘And my ways are far beyond anything you could imagine. For just as the heavens are higher than the earth, so my ways are higher than your ways and my thoughts higher than your thoughts’” (Isaiah 55:8-9 NLT).  What looked like sheer madness turned out in the end was a reminder to stay the course and let God handle the details.  Life seems to work a lot better that way.

Should Leia have been in her place?  Considering what we’ve learned about her in the preceding four films, the answer is an emphatic no. It simply isn’t within her character arc to sacrificially go out on that kind of limb for the Resistance. Introducing Admiral Holdo brings a figure to the party that isn’t fleshed out well enough to prevent her from using her ship as a chef’s knife.

I think that, over time, The Last Jedi will prove to be an indispensable part of the Star Wars canon of films.  It upsets the apple cart just enough to encourage people that change can be a good thing at times. It reminds us that life is not to be lived out of the world while somehow in the world.  It challenges us to consider that sometimes our impulsive nature isn’t the best option available.  In a convoluted way, it prods us to be better than we were when we entered the theater.

And isn’t that what all good films strive to accomplish?