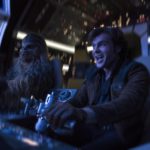 With the release of SOLO: A STAR WARS STORY, Disney wants to take you back in time to meet a young Han Solo before he even thinks about joining the Rebellion. However, with struggling box office receipts, even they were left reeling by the film’s mixed response. (Could there actually be a Star Wars film… [Read More]