Going into this movie, I knew that it was a satirical take on a nonfiction book about an army general but nothing about the true events surrounding this story. I’m generally intrigued by most true stories no matter how ‘off the beaten path’ they may be. Knowing that they actually happened, films based on true stories always hit me harder than others and I usually feel that I learned something in the process.

After watching War Machine, I wanted to do some research on the book it was based from in order to get more background context. Entitled “The Operators – The Wild and Terrifying Inside Story of America’s War in Afghanistan”, the book is written by Michael Hastings, a journalist at Rolling Stone who accompanied General Stanley McChrystal (the real life General that the film is based upon) to assist in gathering help with their war efforts. Michael Hastings was present when the team openly bashed the Obama administration and produced a piece about his time with General McChrystal, ultimately leading to McChrystal’s firing.

The first thing that stood out to me within the film was Brad Pitt. (No, not like that!) Pitt plays the role of General Glen McMahon, the character based on the real life General Stanley McChrystal. Throughout the film, Pitt has a large focus on physical acting in the way he walks, talks, runs, uses his hands, and moves his face. Initially, I appreciated the way he was playing this role. I typically have a lot of respect for the way he dives into his characters but it didn’t take long for me to think that it was very overdone.  Still, I suppose, this is where the satirical aspect of the film kicks in. 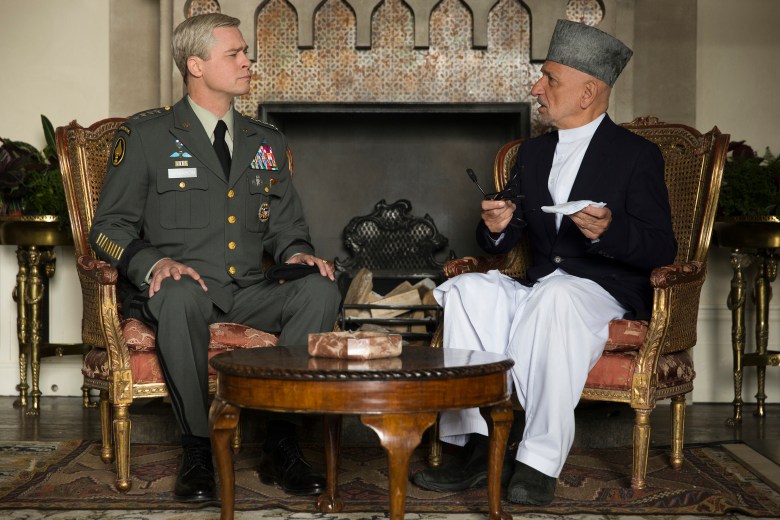 The other obviously satirical character was President Karzai, played by Ben Kingsley, who was portrayed as a complete joke. Both General McMahon and President Karzai are downright caricatures – obvious exaggerations of who the real life inspirations would have been.

Besides McMahon and Karzai, all other characters seem completely normal and serious. I think this is where my confusion with this film began. I didn’t know where they were taking the film, nor what tone they were expecting the audience to take from it. There was a very blurry line between being a serious war film and a satire.

One interesting element is that they seem to be intentionally making (then) President Barack Obama look bad. The scene in front of the airplane made it seem like Obama only wanted a photo op with General McMahon and no actual face time as originally anticipated. I found this to be an interesting way to approach the addition of President Obama into the film. As mentioned above, the bashing of the Obama administration by McMahon and his team led to McMahon’s firing. They could have put Obama in a more positive light, but perhaps they wanted us to see the Obama that General McMahon saw in order to build that story line.

In my opinion, the best part of this movie was RJ Cyler, who played Andy Moon. He was in most of my favourite scenes. I was immediately interested in him when he spoke up during General McMahon’s address to his new troops:

“…it seems to me that we’re all here with our guns and (expletive) trying to convince these people that deep down we’re actually really nice guys. And I don’t know how to do that, Sir, when every second one of them, or every third one of them, or every tenth one of them is trying to (expletive) kill me, Sir. Cause I’m a marine. Cause we’re marines. And it seems like now they’re handing out medals for heroically not being a marine, Sir. I’m confused, is what I’m trying to say, Sir.”

This scene was fantastic. I’m definitely looking forward to what RJ Cyler will do in the future.

This particular scene really got me thinking about the war efforts in Afghanistan. Certainly, the main focus of the war was to remove the Taliban from power in the wake of the devastating 9/11 attacks. During this scene, another marine was discussing what exactly they were doing there. He says “to protect the people from the enemy”. How interesting and simultaneously heartbreaking to think about how difficult and tragic this must have been. The marines had to determine who was a civilian and who was an enemy, not knowing whether someone may try to kill them or if they were innocent bystanders. On the flip side, think about strange troops invading your town and shooting at your family. To those locals, the troops are the enemy. I feel so contradictory about it all. I’m sure we all remember hearing about the war in Afghanistan on the news but were barely shaken by hearing about it because it didn’t directly affect us. This is almost a tragedy in and of itself.

Moving back to the cast, John Magaro and Topher Grace played the secondary roles of Cory Staggart and Matt Little respectively.  I really enjoyed their additions to the film and would have loved to see them in a few more scenes. 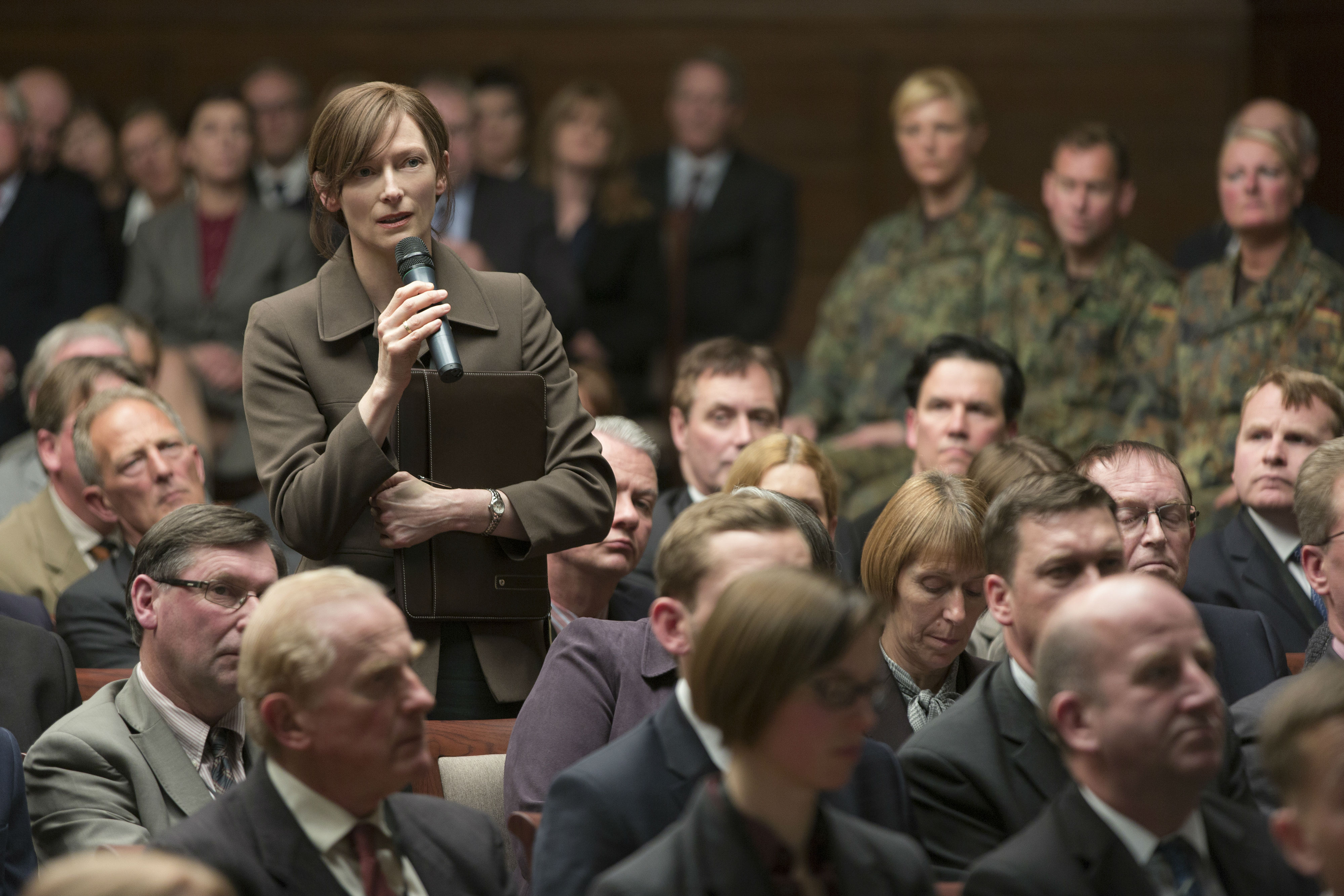 An unexpected but welcomed addition to the cast was Tilda Swinton, who played a brief role as a German politician who burns General McMahon during a presentation where he is speaking. She did a phenomenal job with her accent and monologues, as you would expect from the always intriguing Ms. Swinton.

Cameron from Ferris Bueller shows up too! I’ll pay the guy enough respect to call him by his real name, Alan Ruck. Who, by the way, has three new projects in the works in the next year and a half!

One more random and very brief appearance is made in the last scene of the movie by none other than Russell Crowe. He plays Bob White, who replaces General McMahon after he gets fired. Interestingly, Russell Crowe is not credited. And his appearance seems to open the door for a possible second installment.

Soundtracks are a fascinating element to film and they can either make it or break it. The War Machine soundtrack was all over the place. Anything from hip hop to classical. Standard background score to Lady Gaga. This could be attributed to the satirical nature of the film, so it’s difficult for me to fault it but I spent a lot of time during the movie wondering what path they were going on with the music.

As a whole, I think this movie missed the mark. I must admit, my exposure to satirical film is not vast, and that could be a large reason why it wasn’t my favourite. Personally, I thought it was disjointed and confusing. I have spoken to some fans of satire that share my feelings on this film. However, some fans online are comparing this film to one of the great satires, “Dr. Strangelove” by Stanley Kubrick.

So this begs the question: What makes a successful satire? Are satires best when they’re more obvious or subtle? I have always assumed satires were more like comedies, and were just poking fun. Although this is sometimes the case, it’s interesting to see how subtle some satire can be, as I have undoubtedly learned from watching War Machine.

My bottom line – I recommend watching this movie if you have a deep appreciation for satire, as you will likely grasp this movie far better than I.  If you aren’t as much of a satire fan, I would pass on it.