Welcome to the 2021 edition of AFI Fest. Last year, the festival was all done virtually. This year is a hybrid with some films being available virtually and others only shown in the theaters at the TCL Chinese Theatres in Hollywood. The festival is abbreviated from pre-pandemic years only covering 4+ days instead of the usual 7+. But there are still some exciting films coming here. My first day was a virtual day.

Paris, 13th District (Les Olympiades, Paris 13e) is the latest film from Jacques Audiard (A Prophet, Rust and Bone, and The Sister Brothers). His films are often intense and challenging. Paris, 13th District is a look at the Millennial world of relationship that seem to be a mash up of friendship, lack of commitment, and sex (lots of it).

In Megan Mylan’s documentary Simple as Water, we meet various Syrian refugee families struggling to find a place in the world as they are separated from others. A mother with four children in Athens, hoping to be able to be reunited with her husband in Germany. Another mother in Turkey considering putting her five children in an orphanage because she cannot care for them. A man in the U.S. with a 9th grade brother who lost a leg in a bombing. A woman still in Syria hoping to get word of a son missing in Raqqa. All are in a kind of limbo. They have hope for reunification and a future better than they are living, but nothing is assured for them. Simple as Water will be available on HBOMax on November 16.

And let’s look at some shorts while we’re here.

In the Israeli film Her Dance from Bar Cohen, Aya shows up at her sister’s wedding Sabbath dinner uninvited. She hasn’t been invited because she is estranged from her Orthodox family because she is a trans woman. Her mother is afraid someone will recognize her and the groom’s family will cancel the marriage. Some terrible things are said (especially by Aya’s mother), but there is a touch of grace, even if we are left in an emotional emptiness. (22 minutes)

For H.A.G.S. by Sean Wang, the filmmaker was going through his eighth grade yearbook and decided to contact some of his friends from that time to touch base and see how everyone was coping with adult life. It is a rather phrenetic mix of edited conversations with yearbook pictures of the various speakers. They seem to be in one of those cusp periods of aging—not yet middle age, but no longer young adults. (9 minutes)

How does one survive without being “officially” a person? For people such as refugees or the poor, there may be no paper trail of their existence. In Capernaum, from Lebanese director Nadine Labaki, we see a boy struggle with life in that kind of world. 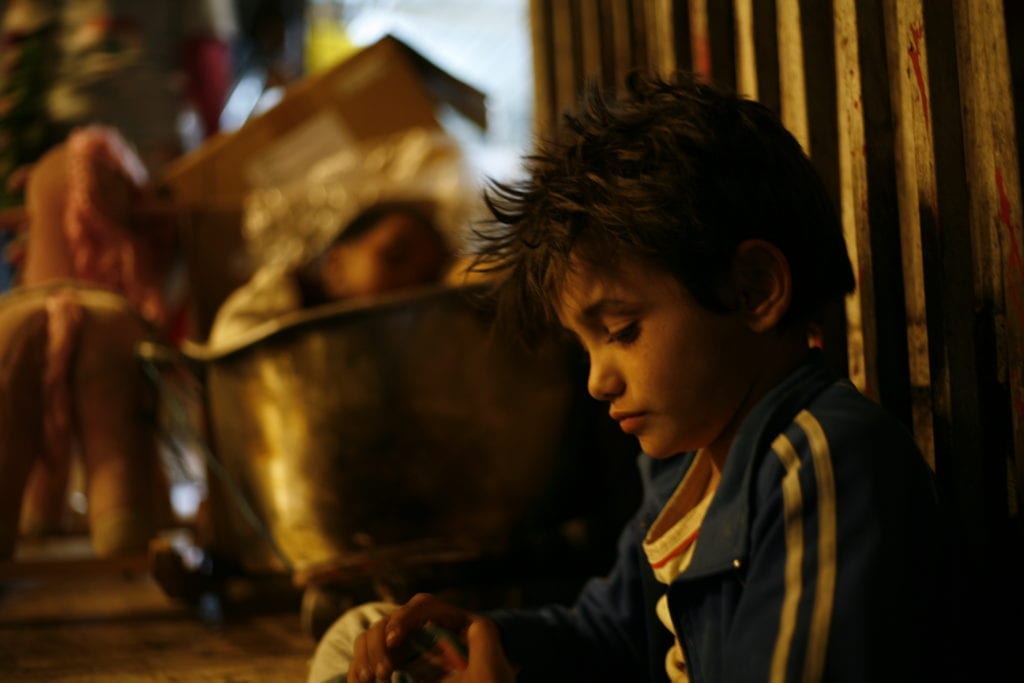 Zain (Zain Al Rafeea) is about twelve years old (based on a doctor’s physical exam), but looks younger. His family can’t provide for him or his sister. Soon they arrange for his sister’s marriage (at fourteen) and in anger Zain leaves to live in the streets. He is resourceful and determined. Soon he his taken in by Rahil (Yordanos Shiferaw), an Ethiopian refugee without proper work papers. Zain becomes a caregiver and provider for her and her baby son Yonas. Zain survives by his street smarts, but when Rahil is arrested Zain’s resources become vary scarce as he tries to care for Yonas on his own. After Zain is arrested for a serious crime, he ends up in court where he demands justice, suing his parents for bringing him into this world.

I’ve seen two of Labaki’s previous films (Caramel and Where Do We Go Now?). Both are lighthearted with a bit of bite. They deal with women finding empowerment. Capernaum is a much different kind of film. It is about those who have no power and little chance at empowerment. It makes it clear that for people such as these, no help can be forthcoming without some sort of paper that proves you exist. The film portrays these people with dignity. The film is especially focused on children in this plight. It makes it painfully clear that these are people like us, but who are trapped by systems that make them invisible and powerless. This vision of humanity led to the film winning the Prize of the Ecumenical Jury at Cannes.

Labaki used many non-professional actors in making this film in order to have their true reactions. Many of those in the film actually lead lives such as we see on screen. There are refugees and undocumented people. Often she would describe a scene for them and let them play it out in their own words and emotions. This brings a sense of realism into the story. The kinds of heartbreak that we see onscreen are daily lives for many. 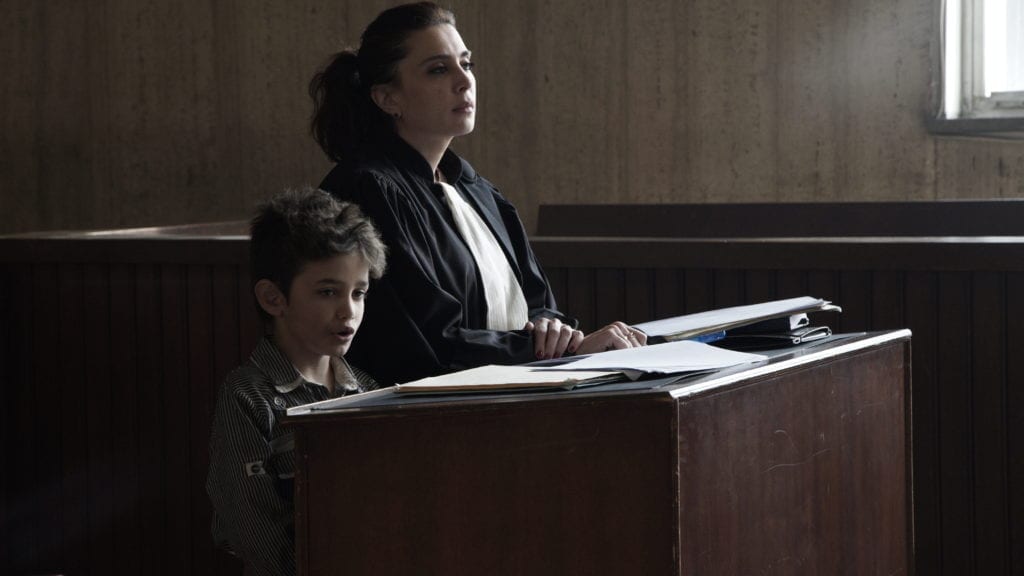 In production notes for the film, Labaki says the title comes from the French word “capharnaüm” which translates as “chaos”. She also notes that it is the name of a biblical city, which was “a place where miracles could happen.” She goes on to say, “That’s what’s going on in the world right now. It’s a mixture of chaos and miracles every day.” It is interesting to look at the film with those two concepts in mind. We can ask ourselves where we see the miracles in Zain and Rahil’s world? There is hope in the film, but it is certainly elusive. But the very idea of having hope in such a dark world could be a miracle itself.

Capernaum has been nominated for a Golden Globe and is Lebanon’s official entry for Best Foreign Language Oscar consideration.

“We pray that God will find you a friend who will support you and help you along the path.”

What does it mean to be homeless, a refugee, and struggling to find a way to righteousness in a strange land? In A Stray Adan (Barkhad Abdirahman) is a young Somali immigrant in Minneapolis. He has been kicked out of his home for stealing from his mother and from friends’ apartment because he doesn’t work or help out. He finds himself living in the mosque, but soon finds someone there who will give him a chance working in a restaurant. But on a delivery, Adan hits a dog with the car, and in the aftermath loses his job and is out on the streets with a dog in his charge. 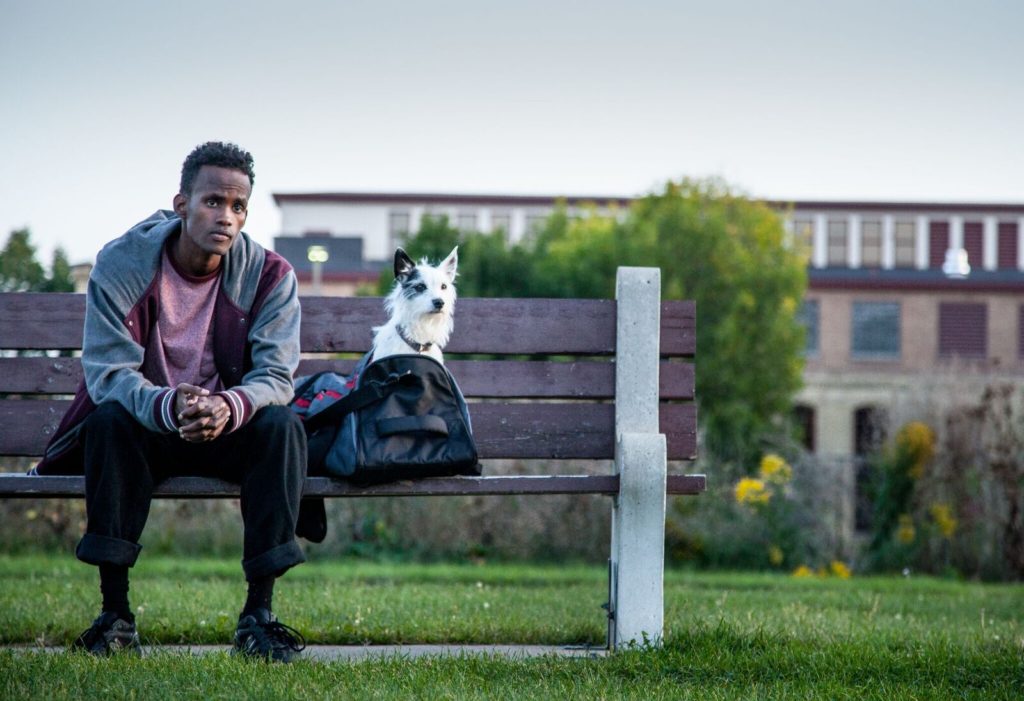 For many Muslims a dog is considered unclean. This becomes yet another barrier between Adan and those around him. (Although the imam does tell a story from Mohammed [peace be upon him] about the treatment of animals that reflects a different view.) Yet as Adan and the dog make their way through the trials of homelessness, Adan begins to find a new sense of responsibility that allows him to begin to grow.

The obvious metaphor is that Adan is as much of a stray as the dog. He feels as though no one truly cares for him. His friends lead him down the wrong paths. His mother won’t help him until her returns what he’s taken. An FBI agent provides him with help, but expects him to inform on (perhaps even frame) his friends. He even ponders if God cares, because he feels as though his prayers are unanswered. 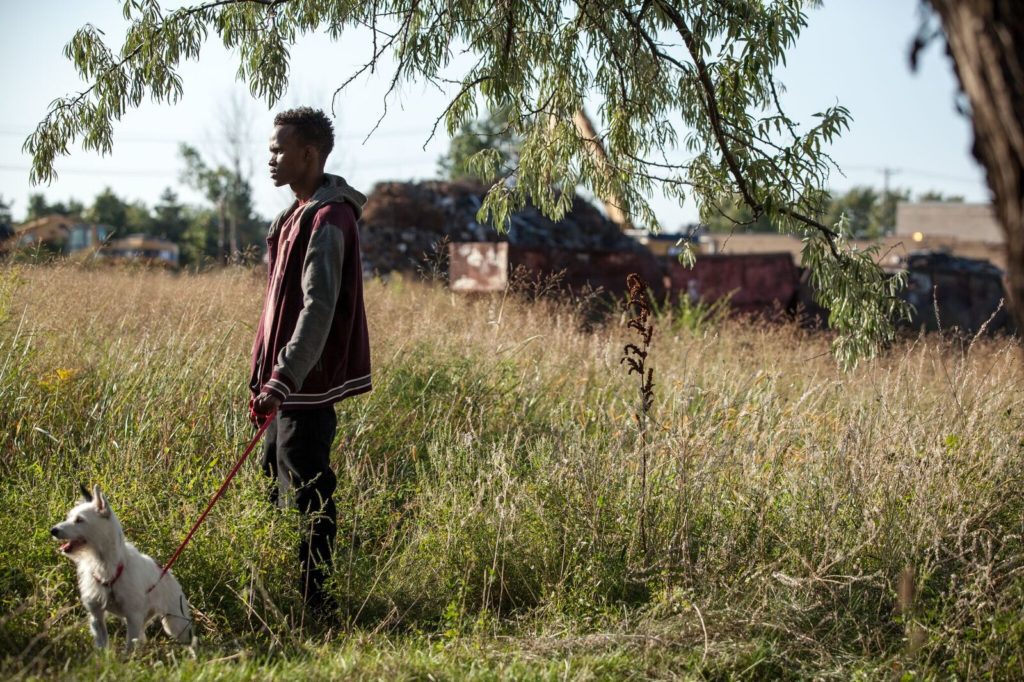 The key question asked in the film is what does it mean to be a stray? It is of note that the term “astray” comes up in various prayers and readings from the Quran. For Adan his life has been defined by going astray—not just from the paths of righteousness (although he does seek to be a good Muslim), but from all the cultural underpinnings of his life. He is (as was Abraham) a stranger in a strange land. This is not his home, but it is the only chance he has to find a home. We are asked to consider our response to the “strays” in the world around us. Often the stray animals we encounter can become beloved parts of our lives. What of the stray people we meet?