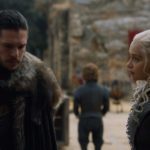 Winter has come. In the seventh season of HBO’s Game of Thrones, which may be the most addictive television show of all time (at least, since Lost), the separate worlds held apart by power, water, and dragons finally crash together in an explosive penultimate season in George R.R. Martin’s wickedly created series. Now available on Blu-ray, DVD,… [Read More]