Cyrano, My Love is an intersection of live and art. It could be debated which is imitating which as we follow fin-de-siècle French poet/playwright Edmund Rostand as he struggles to create the play which brought him fame and success, Cyrano de Bergerac. The film opens as Edmund (Thomas Solivérès) is opening an unsuccessful play. He… [Read More] 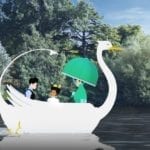 Dilili in Paris is a celebration of fin de siècle Paris. While it is an animated story of a young dark-skinned girl’s adventure, the core of the film is to meet some of the amazing men and women (especially women) of the Belle Époque. The center of the film is Dilili, a young girl from… [Read More]